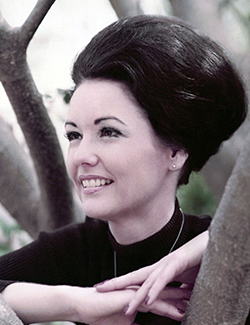 Mattie Mae McKee, the daughter of Sarah Taylor McKee and John Thomas McKee, was born in Sonora, Texas, on November 26, 1938. Her uncle, Basil Halbert Taylor, employed her throughout the summers of her high school years in the Law Office of Taylor & Murray in San Antonio, instilling within McKee a love of the legal profession. After graduating from San Angelo High School in 1957, McKee earned her Associate’s degree in Business at San Angelo Junior College in 1959. She worked as a legal secretary for the firm of Kerr & Gayer where she earned her certification with the National Association of Legal Secretaries in 1966. At the time, McKee was one of twelve Certified Professional Legal Secretaries in Texas and the ninety-sixth to be certified in the nation.

In March 1968, McKee entered the realm of national politics as a congressional aide. Throughout her 21-year career in Washington, McKee worked for three U.S. Representatives and two U.S. Senators: Representative O.C. Fisher of Texas (1968-1974), Representative W. R. Poage of Texas (1974-1978), Representative Marvin Leath of Texas (1979-1980), Senator John Tower of Texas (1980-1985), and Senator John Warner of Virginia (1985-1989). Due to the significance of her positions, she met countless politicians and celebrities including George H. W. Bush, Barry Goldwater, Elizabeth Taylor, and Charlton Heston. Because Fisher and Tower were involved in the House and Senate Armed Services Committees, respectively, McKee also attended the christening ceremonies of several naval vessels and visited cadets at the military academies.

When President George H. W. Bush nominated John Tower for Secretary of Defense in 1989, Tower named McKee his Confidential Assistant to the Secretary of Defense. Tower's nomination failed to pass the Senate, however. Following her lengthy career as a congressional aide and Tower's unexpected defeat, McKee left Washington, D.C. and returned to San Angelo. There, she enrolled at Angelo State University, majoring in English and history. Afterwards, she worked briefly in the real estate field. She also pursued writing, co-authoring a two-volume family history, The Stories of the Taylors and Altizers: Passing It On, with her cousin, Blanche Taylor Regeon Babcock, in 2002. McKee later recounted her experiences as a congressional staffer in Washington, D.C. in her 2014 book, In the Shadow of the Greats: From Texas' Square Roots to Capitol Hill's Inner Circle.

On March 15, 2018, McKee came to Baylor University and spoke as part of a panel entitled "Sharing Her Story" in which she discussed her career in the nation's capital. She is currently involved in the San Angelo Writers Club and is a member of the Standing Committee for the W. R. Poage Legislative Library. She continues to work as a legal secretary and office manager for the Charles W. King Law Firm and is an active member of Southgate Church of Christ.