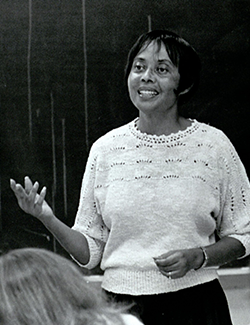 Born in Waco, Texas, on February 10, 1932, Dr. Vivienne Malone-Mayes repeatedly encountered barriers to her education because of her race, yet she consistently overcame them. She graduated from A.J. Moore High School at the age of 16 and earned her bachelor's and master's degrees in mathematics from Fisk University in 1952 and 1954, respectively. In 1961, Baylor University denied Malone-Mayes entry into the doctoral program, so she attended the University of Texas and became only the fifth African-American woman in the nation to earn a Ph.D. in Mathematics. She was then hired by Baylor University as a mathematics professor and remained in that position until her retirement in 1994. Throughout her life, she gave back to the community by actively participating in New Hope Baptist Church and serving on the boards for several organizations including Family Counseling and Children Services. She passed away on June 9, 1995, at the age of 63.