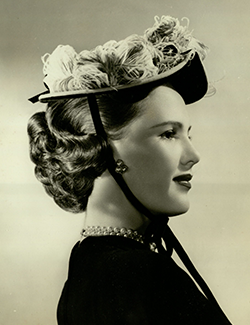 Grace Rosanky Putnam Jones was born in Waelder, Texas, in 1920. In 1942, she entered Women Air Force Service Pilots (WASP) training at Avenger Field in Sweetwater, Texas. She eventually became Commanding Officer of her unit. After World War II, she made a name for herself as a runway and commercial model in New York City. She later married Lt. Colonel Jack Jones, whom she accompanied on his Air Force postings in Germany during the Berlin Airlift and then in Japan. She became the first American to perform the Japanese tea ceremony, earning her press coverage all over Japan and leading President Dwight D. Eisenhower to name her an "ambassador abroad."

Jack and Grace settled in Texas where she opened an internationally famous couture fashion store, Grace Jones of Salado. Through her many connections in the fashion industry, and a private landing strip behind the store, Jones built an international base of customers. After nearly 40 years in business, she closed her store in 2000. Twenty-five newspapers and magazines announced the closing throughout the world. Jones lived the rest of her life quietly, dying on February 16, 2008.