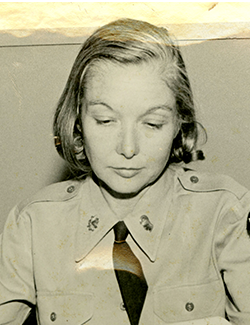 Born on September 27, 1910, in Waco, Texas, Isabella M. Henry enjoyed a successful career in the Women's Auxiliary Corps (WAC) of the United States military. She earned her bachelor's degree from the University of Texas, took a few classes at the University of California at Berkeley, and graduated with a master's in sociology from Texas State College for Women in Denton. World War II provided new ways for women to participate in the war effort, and in August 1942, Henry enlisted in the Women's Auxiliary Corps. She was appointed to the rank of Third Officer on January 9, 1943, and was later promoted to First Lieutenant on December 8, 1948. She became influential in her unit's news publication and received numerous honors for her service, including the certificate of commendation. She retired from active duty after 19 years in the WAC on January 1, 1961, and died on February 20, 1994.