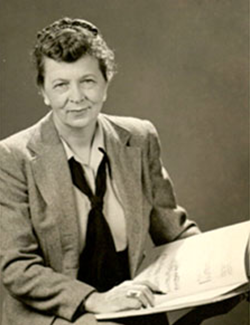 Roxy Harriette Grove was born in Liberty, Missouri, around 1889. She graduated from Howard Payne College in 1906 when the school was a two-year college and received her A.B. degree from Baylor University in 1908. She later received her B.A. and M.A. degrees in music from Baylor and was awarded a Doctor of Music degree from the Southern School of Fine Arts in Houston. Grove served as a missionary to São Paulo, Brazil, from 1909 to 1912. From 1912 to 1913, she studied music under Arthur Schnabel in Germany. She taught at Howard Payne College and Hardin-Simmons University before accepting a position at Baylor University in 1926. During her administration as chair of the School of Music from 1926 to 1943, Baylor became the first school in Texas to attain membership in the National Association of Schools of Music. Roxy Grove Hall at Baylor was named in her honor. Grove was active in the Texas Association of Music Teachers, National Matthay Association of America, Mu Phi Epsilon music society, Waco Music Teachers Association, and the Waco Ensemble Club. She continued to teach music at Baylor until her death on January 8, 1952.