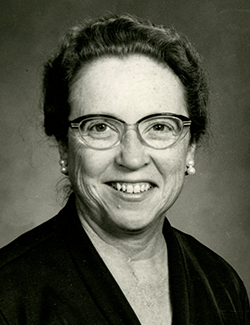 Julia Saccar Graham was born in Hallettsville, Texas, in 1916 and graduated from Baylor University. She married Henry Hagood in 1938, and the two were appointed as Southern Baptist missionaries to the Middle East. The pair arrived in 1945, but Henry died within a year, leaving a widowed Julia to care for their infant son. She remained in the Middle East and married missionary Finlay Graham in 1947. The couple had four daughters and served in Jordan and Lebanon. At home on furlough, Julia earned her Master of Religious Education from Southwestern Theological Seminary. Back in Lebanon, she led women's ministries and worked as a librarian, English teacher, and administrator at the Arab Baptist Theological Seminary established by her husband. Graham later compiled a history of Baptists in Lebanon. Due to the Lebanese Civil War, the Grahams relocated to Cyprus in 1977. The Grahams retired in 1987 to Dallas, Texas, and she passed away in 2015.

More information about Julia Saccar Graham can be found in the Julia and Finlay Graham papers at The Texas Collection.