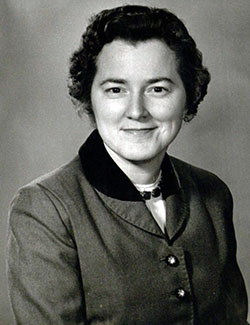 Elizabeth "Jane" Anderson Goode, the daughter of R.O. and Dannie Anderson, was born on March 25, 1930, in Cotton Plant, Arkansas. Jane graduated from Hendrix College in Conway, Arkansas in 1951. She married Clement Goode, who also attended Hendrix College, on August 19, 1952. Jane worked at the Open Windows Department of the Baptist Sunday School Board while Clement attended Vanderbilt University.

The couple moved to Waco in 1957 and eventually had two children, Sara and Robert. Clement joined the English department faculty at Baylor University. Jane taught elementary school before teaching freshman English at Baylor. Goode earned her master's degree at Baylor in 1965 upon completion of her thesis, A Historical Study of Reading Instruction in the Elementary Schools of the United States, 1880-1963.

Goode participated in several civic and religious organizations including the Baylor Round Table and First Baptist Church of Waco. She passed away on August 8, 2018.

More information about Jane A. Goode can be found at the Institute for Oral History.