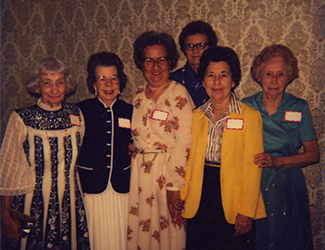 The Garden Clinic Garden Club was established in Waco, Texas, as an evening garden club that catered to businesswomen who were unable to attend daytime meetings. They were colloquially known as the “business women's’ garden club.” During the preliminary meetings in the summer of 1951, the organization’s name, flower (amaranthus), and color (flame) were chosen. The first club meeting was held on September 11, 1951, with fourteen charter members. That October, it was decided that the club would limit their membership to twenty-four women. Members participated in home gardening, floral arrangement, and community service.