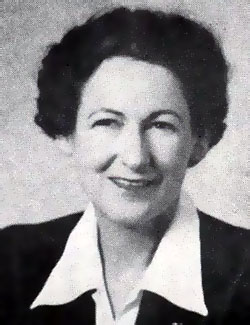 Elma Merle Mears McClellan Duncan was born on September 6, 1895, to Thomas Robert Mears and Rosa Elma Belcher Watkins. Her family moved to Gatesville when her father was elected to the Texas House of Representatives. Merle, who went by her middle name, graduated from the University of Texas in 1917 with a double major in history and science. Over the next few years, she served as a teacher in the Gatesville area. On June 1, 1920, she married lawyer William Clay McClellan, and in 1922, the couple had their only child, Thomas Rufus McClellan. The McClellan family moved to Waco to further Clay's law career, but in 1938, he passed away from cancer at the age of 48. The following year, Thomas accepted an appointment to the U.S. Naval Academy in Annapolis, Maryland. Merle accompanied her son and subsequently began graduate work at George Washington University.

Duncan eventually returned to Waco where she earned a master's degree in history from Baylor University in 1941. She taught briefly at Baylor from 1941 to 1945 while also serving as the Armed Services Representative for the university. Baylor President Pat Neff appointed her to the position in the spring of 1943. Her responsibilities centered on acting as a liaison between the government and the university, particularly proposing exemptions from military service on a case-by-case basis. Merle left Baylor in 1945 when she married businessman Bruce Duncan. She eventually taught again at Baylor University from 1956 to 1960 before retiring in Waco. She passed away on September 30, 1985, at the age of 90.