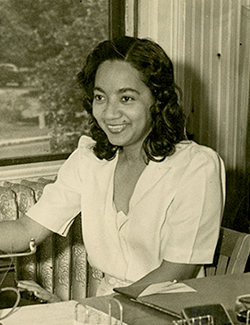 Mary "Kitty" Jacques Du Congé was born on July 5, 1908, in New Orleans to Joseph and Venita Molina Jacques. She met Oscar Du Congé as a child and they were married on January 2, 1937. The couple adopted one son, Michael. While Mary finished her teaching certificate at Xavier University, Oscar studied adult education at Southern University. In 1942, he was drafted into the Army and stationed at Fort Huachuca in Arizona. Mary got a job on base as a secretary and the two lived in Arizona for the duration of the war, except for the short time Oscar was stationed in North Africa. After the war, the Du Congés spent a brief time in New York and Pittsburgh before returning to New Orleans. Mary taught elementary school while Oscar got his master's in social work via correspondence at the University of Atlanta. In 1948, two years after obtaining his master's, Oscar accepted a position at the Veterans Affairs Hospital (V.A.) in Waco.

During the 1950's, Oscar left the V.A. to co-own and operate the Doris Miller Memorial Park Cemetery. Around the same time, Mary became the first African-American secretary at the James Connally Air Force Base. She would continue in government work for the rest of her career. In addition, she was an active volunteer within the Catholic community and the Waco community at large. She was involved in organizations including the Joie de Vivre Club, St. John's Catholic Church, and Caritas (a Catholic group seeking to alleviate hunger). Oscar died on July 26, 1978, and Mary followed on August 31, 1999.