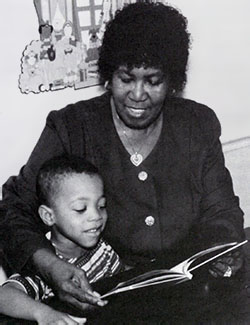 LaRue Gilbert Dorsey was born in Waco in 1932/1933. She was the eldest child of a minister and had four younger brothers, one of whom was Robert Gilbert, the first African American to graduate from Baylor University in 1967.

Dorsey graduated from A.J. Moore High School in 1949, earned a B.S. from Mary Allen College in Crockett, Texas in 1952, and earned a master's degree in secondary education from Texas Southern University in Houston. As she asserted in her oral memoirs, she grew up in segregated, all-black schools.

After securing her education, Dorsey became a teacher in the Waco Independent School District. When Waco public schools were integrated in 1970, Dorsey was transferred to an all-white school to ease the transition for the students. Overall, she taught for Waco ISD for thirty-four years.

Following her retirement, in 1986, Dorsey used her retirement savings to fund the creation of a preschool program in Waco, LaRue's Learning Center, in an effort to help children from minority or low-income families.

More information about LaRue Dorsey can be found at the Institute for Oral History.