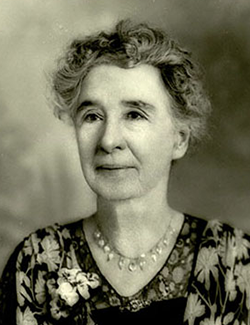 Born in Harris County, Texas, in 1861, Adina Emilia De Zavala was the granddaughter of famed Texan revolutionary Lorenzo de Zavala, who later served as the provisional Vice President of the Republic of Texas. She attended Sam Houston Normal Institute and studied music in Missouri before returning to Texas to teach. In the 1880s, she began work with the Daughters of the Republic of Texas (DRT) to restore and preserve several missions in the San Antonio area, including the Alamo. De Zavala and the DRT split over questions of the authenticity of the Alamo's Long Barrack in a highly publicized controversy dubbed "The Second Battle of the Alamo." She succeeded in preserving the Long Barrack after staging a sit-in protest at the site when the governor tried to sell the property.

De Zavala preserved several other sites throughout the state and founded the Texas Historical and Landmarks Association. She was also a charter member of the Texas State Historical Association, and Governor Pat Neff appointed her to the Texas Historical Board in 1923. She served on the advisory board for the Texas Centennial Committee and wrote works on Texas history. After dedicating her life to preserving the history of Texas, Adina E. De Zavala died in 1955 at the age of 94.