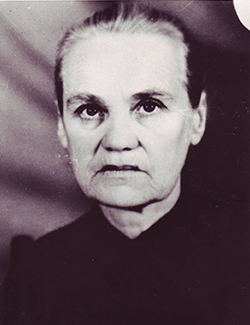 Anna Chertkova after her release from compulsory psychiatric treatment at age 59.
(Photo: Keston Center for Religion, Politics, and Society)

Anna Chertkova was born on December 26, 1927, in Alma-Ata, Kazakhstan. She actively attended an unregistered Baptist church from an early age. In the 1970’s, she began teaching and advocating for religion throughout the Soviet Union.

Authorities declared her criminally insane and arrested her in August 1973. Her trial began on February 12, 1974, under article 170-1 Kazakh Criminal Code (circulation of deliberately false concoctions, slandering the Soviet State, and social order). She was sentenced to compulsory treatment and indefinite confinement in the Tashkent Special Psychiatric Hospital, which was described by a patient as a “prison mad-house for murderers.” According to the testimony of another prisoner, the staff was abusive and hostile, especially to Chertkova. For refusing to abandon her faith, they frequently subjected her to neuroleptic drugs which caused fever and paralysis and locked her in cells with “zealous atheist criminals.” Despite her tribulation, she was able to write a letter to her family during her ninth year in the hospital stating she would continue to entrust herself to God’s care and believe in His plan.

However, Chertkova’s plight did not go unnoticed. In 1985, more than 5,200 Irish Christians approached the Soviet Embassy in Dublin with a petition to reexamine her case. The petition was rejected outside the embassy’s gates and “Mr. Sergei Davidov, Second Secretary at the Embassy, admitted that in the Soviet Union the practice of the Christian faith could be seen as abnormal.” In the summer of 1987, several campaigns on her behalf were underway in Western countries, including a vigil in Birmingham, England, calling for her release.

In 1986, authorities transferred Chertkova to the Special Psychiatric Hospital in Kazan. She left the hospital in Tashkent on January 31 and arrived in Kazan on February 8 in handcuffs, despite suffering from body tremors. She was finally freed on December 1, 1987. At her release from the hospital, Chertkova was age 59 and the longest-serving prisoner at over fourteen years.

Officials took her to her niece’s house in Alma-Ata. Anna Chertkova called her sister in West Germany on December 3, 1987, asking her to thank everyone who prayed and petitioned for her release and adding Christmas greetings. Because her freedom seemed precarious in the Soviet Union, Chertkova desired to join her sister, and the two began the lengthy immigration process.

More information about Anna Chertkova can be found in the Keston Center for Religion, Politics, and Society.