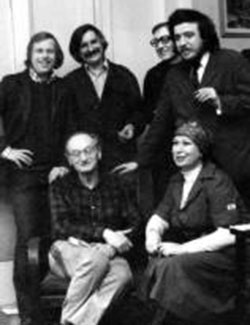 In 1977, writers, activists, and intellectuals banded together to petition Czechoslovakia's communist party on the issue of human rights. Inspired by the Helsinki Agreement, the informal civic organization drafted a petition titled "Charter 77," named for the year of its publication. Several women participated prominently in the movement, including journalist Otka Bednárová, psychologists Dana Němcová and Jarmila Bělíková, and author Zdena Tominová who served as a spokesperson. Signatories of Charter 77 faced severe persecution for their activism, and many were arrested in May of 1979 for "acting against the interests of the Czechoslovak Socialist Republic." Despite state persecution, the group continued their crusade until the fall of the Socialist Republic in 1989, and many served in the newly formed democratic government. Tominová emigrated to England, where she published a number of works concerning her experiences as a human rights activist under an authoritarian regime.

More information about Charter 77 can be found in the Digital Archive at the Keston Center for Religion, Politics, and Society.