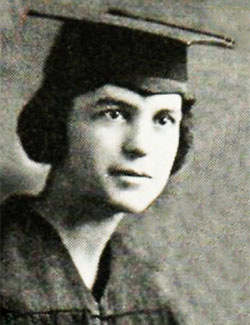 Anna Gladys Jenkins Casimir, the daughter of Reverend Thomas Henry Jenkins and Lavina Fronabarger, was born in Oak Ridge, Missouri, on November 18, 1901. The Jenkins family moved to Texas in 1908 after physicians diagnosed Lavina with tuberculosis. Once in Texas, Thomas Jenkins, a Baptist minister, wanted all five of his children to attend Baylor University.

Thus it was that Casimir came to Baylor University, majoring in education and sociology. As a student, Casimir worked at the main library's circulation desk, and when Carroll Library caught fire in 1922, she was one of the students who helped rescue as many books as possible. In her senior year, Casimir was a student assistant for Dr. Samuel Grove Dow, a professor of sociology accused by fundamentalists led by J. Frank Norris of teaching evolution to Baylor students. Casimir faced some adversity as her boss resigned amid the scrutiny he received, but she graduated from Baylor in 1922.

Following her time at Baylor University, Casimir briefly moved back to Missouri to live with her parents. She taught high school Latin and Spanish for two years in Charleston, Missouri, before moving to Jackson, Mississippi, where she taught history and physical education for two years. She then took a sabbatical from teaching to earn her master's degree in sociology from the University of Missouri at Columbia. Afterwards, in 1927, Casimir moved to Calvert, Texas where she lived for most of her remaining years. She taught high school until 1940 when she married Louis S. Casimir, the owner of a local grocery store. Following her husband's death in 1949, Casimir sold her husband's store and returned to teaching for the next seventeen years. She was active as a Sunday School teacher for the First Baptist Church of Calvert and was president of the Woman's Missionary Union.

More information about Anna Gladys Jenkins Casimir can be found at the Institute for Oral History.