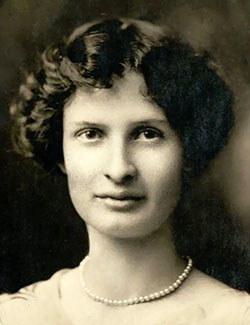 Aleph Tanner Carter was born in Chicago, Illinois, on May 11, 1896. She was the eldest of three children born to Dr. John S. Tanner and Mary Barton. Dr. Tanner worked as a professor at Baylor University in the 1890's and simultaneously served as the pastor of East Waco Baptist Church. Despite an auspicious start to life, Aleph and her siblings, Aura and John, soon faced terrible trials. Dr. Tanner died unexpectedly of pneumonia in 1901 at the age of 31, leaving behind his widow and three children. Shortly thereafter, Mary Tanner contracted tuberculosis and relocated to New Mexico to combat the illness. The Tanner children were shuffled between relatives and friends of the family, moving to Mount Calm (TX), Alamogordo (NM), Brazil, Corpus Christi (TX), and San Marcos (TX). While visiting her sister in Brazil, Mary passed away, leaving her three children under the care of their aunt and uncle.

Through the generosity of a family friend, Carter and her siblings were granted the opportunity to study at San Marcos Baptist Academy in 1913. Dr. Samuel Palmer Brooks, President of Baylor University and a friend of the Tanners, personally funded a portion of the Tanners' education and paved the way for Carter to attend Baylor. She graduated from the university in 1919 with a degree in history. After teaching briefly at the high school level, Carter taught history at Baylor Academy. She earned her master's degree at the University of Pennsylvania and returned to Baylor, teaching Texas and English history at the college-level. In addition to her teaching responsibilities, she became the first curator of The Texas Collection, one of Baylor's special collections.

While taking doctoral classes at the University of Texas at Austin, she reconnected with a former mentor, Edward S. Carter of Wichita Falls, Texas. The couple were married by J. M. Dawson on October 19, 1928 and went on to have two children: Edward, Jr. and Mary. Carter's daughter, Mary, became the third generation of her family to teach at Baylor University when she taught as an instructor of piano for the School of Music. Aleph passed away on September 15, 1987.

More information about Aleph Tanner Carter can be found at the Institute for Oral History.