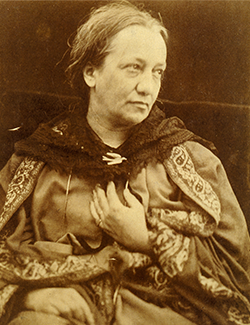 Julia Margaret Cameron (née Pattle, 1815-1879) was a nineteenth-century photographer known for her portraits of prominent Victorians and for her photographs depicting scenes from religious and literary works. Cameron was born in Calcutta, India, was educated in England and France, and was introduced to photography in 1835 by mathematician and astronomer John Herschel. She met and photographed many writers and artists, including Alfred Tennyson, Robert Browning, John Ruskin, Dante Gabriel Rossetti, and George Frederic Watts, and was Tennyson's neighbor for a time in Freshwater on the Isle of Wight. Her niece Julia Prinsep Stephen was one of Cameron's favorite models. Stephen's daughter, the writer Virginia Woolf, parodied Cameron and her social circle in a play titled Freshwater. Woolf also published a collection of Cameron's photographs in 1926.

The Armstrong Browning Library (ABL) has eleven original photographs by Cameron as well as Woolf's Victorian Photographs of Famous Men & Fair Women (Hogarth Press, 1926) and more recent scholarly volumes on Cameron's life and works. Five of the photographs in the ABL's collection are of Robert Browning who sat for Cameron in 1865 at the home Alfred Tennyson. Four additional photographs in the collection were gifts from Cameron to Browning and are inscribed by the photographer. These include a photograph of Julia Prinsep Stephen titled Stella; a photograph of English dramatist and poet Sir Henry Taylor and Cameron's maid Mary Ann Hillier as Friar Lawrence and Juliet from Shakespeare's Romeo and Juliet; a photograph titled La Madonna Aspettante, again featuring Hillier and William Frederick Gould, a boy who lived near Cameron's home; and a portrait of Anne Thackeray Ritchie, English writer and the daughter of novelist William Makepeace Thackeray. The collection also includes a portrait of Tennyson and a portrait of Tennyson's eldest son Hallam.

More information about Julia Margaret Cameron can be found at the Armstrong Browning Library & Museum.