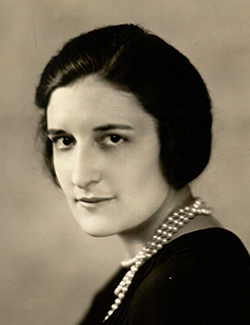 Pauline Breustedt was born in Waco, Texas, in 1898 where her father, William Breustedt, owned a hardware business and was director of First National Bank of Waco. Pauline was educated at Bryn Mawr College and Smith College. She fell in love with the stage at Smith College and began her acting career when she joined the Stuart Walker Company in Cincinnati. There she performed in the Grand Opera House, the Cox Theater, and The Victory Theatre Company, receiving excellent reviews in supporting roles. In 1922, Breustedt acted in the Broadhurst Theatre in New York City, the same year she was selected Queen of the Cotton Palace in Waco. As a debutante, she was active in upper-class society and enjoyed the company of wealthy friends and relatives in New York and New Orleans. She received frequent mentions on newspaper society pages. Breustedt traveled extensively, taking a world tour through Asia, Europe, Central America, Cuba, and Hawaii in 1936-1937. She eventually returned to Waco and passed away in 1978.