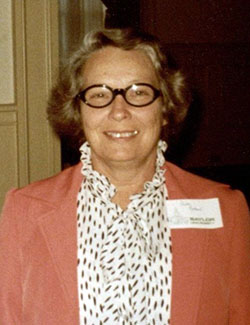 Ruth and John had two children, Jay (born 1951) and Janet (born 1954). The Belew family moved back to Waco in 1956 when John accepted an assistant professorship at Baylor. Ruth joined the Baylor theater department in 1972 where she remained until retirement in 1992.

Throughout her life, Ruth was active in several civic and religious organizations including Baylor Round Table, the Waco Literary Club, the Waco Cotton Palace, and Seventh and James Baptist Church. Ruth passed away on December 31, 2014, six months after Ruth and John celebrated their 70th anniversary.

More information about Ruth Belew can be found at the Institute for Oral History.