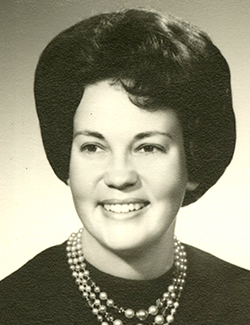 Peggy Place Bartley was born in San Benito, Texas, on August 21, 1929, and graduated from Baylor University in 1949 with degrees in education and speech. She met James Bartley while attending Southwestern Baptist Theological Seminary in Fort Worth, Texas. The two were married in 1952 and had four children together. Three months after their wedding, the Bartleys were appointed by the Foreign Board of the Southern Baptist Convention as missionaries to Uruguay, where they lived until their retirement 41 years later. While in Uruguay, Peggy taught religious education, speech, typing, and English at the Baptist seminary, served as a director of Sunday school at their church, and was elected the president of the Women's Missionary Union. In 1966, she earned a M.A. in Religious Education from Southwestern Seminary. After departing from Uruguay in 1993, James and Peggy taught for a short time at seminaries in Spain, Mexico, and Argentina. She also helped edit a Spanish Bible dictionary for the Spanish Publishing House in El Paso and eventually retired to Waco in 1995. Peggy died on June 23, 2015.

More information about Peggy Place Bartley can be found in the Peggy and James Bartley papers at The Texas Collection.