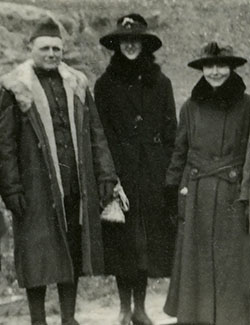 Ruth Newton Baggett was born on April 26, 1882, to James Benjamin and Olivia Evard Newton. She corresponded with James Baggett, who served in the 141st Infantry Regiment of the United States Army during World War I. The two were married on February 3, 1926. They lived the rest of their lives in Milano, Texas, where James was the manager of a lumber yard. Records do not indicate that they had any children. James Baggett died in 1959, and Ruth passed away on November 8, 1976. This collection consists primarily of letters and photographs exchanged between James and Ruth Newton Baggett during World War I.