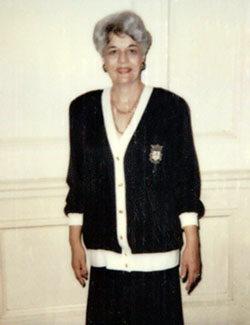 Dorcas Beaver came to Baylor University in 1953 when her husband became a professor in the Baylor geology department. Shortly thereafter, she joined the Round Table as one of its youngest members.

The Baylor Round Table convened twice a month on Baylor's campus in the Union Building (what is now the Bill Daniel Student Center). The women typically dressed in gloves and a hat, and their husbands were expected to leave work early to babysit their children so the women could attend the meeting. The Round Table was created to welcome the wives of the University's professors into the Baylor and Waco communities. Their traditions included an attendance requirement, receiving lines (officers would stand in a line and greet people as they came in), lavish decorations, refreshments and hostessing, covered dish suppers, membership tea, first president's reception, and international dinners.

After she was a member for two years, Beaver was appointed president of the Newcomers, a branch of the Round Table that acted as a social club for new members. While the Newcomers meetings were more social in nature, such as giving tours of campus or gifting women coupons, the Round Table was more intellectual, including lectures, outside speakers, and members' academic paper presentations.

Beaver's family left Baylor University in 1959 when her husband became a research geologist for Exxon Mobil. They moved quite often throughout the next 20 years, living in Houston, France, and England. However, in 1979, Baylor offered her husband the Chair of Geology position, and the Beavers moved back to Waco.

When Beaver returned to the Round Table, she became the Newcomer sponsor and held this position from 1979 to 1984. She was also a member of the Waco Literary Club, the Daughters of the American Revolution (DAR), and the Philanthropic Education Organization (PEO).

More information about Dorcas Beaver can be found at the Institute for Oral History.