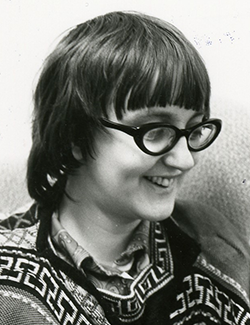 Born in England on February 20, 1948, Marite Sapiets' family had immigrated from Latvia. Although her grandfathers were Latvian, her grandmothers were Russian. Thus, her upbringing prepared her to play an important role at Keston College. She spoke English and Latvian and as a child shared a room with one of her grandmothers who taught her Russian. She gained additional fluency as an exchange student at Moscow University and also learned German. She earned a master’s degree for her study of links between religious groups and the Russian intelligentsia.

Sapiets' mother was a nurse. Her father Janis, an ordained pastor in the Latvian Lutheran Church in Scotland as well as a minister in the Church of Scotland, introduced her to Keston. In the 1970s, Rev. Sapiets headed the British Broadcasting Corporation’s research and information at Bush House and edited religious programming to the Soviet Union. Michael Bourdeaux recognized him as one of the founding members of Keston, and the College often consulted him on Soviet religious affairs.

In 1975, Marite Sapiets joined the Keston staff and became the college’s principal researcher on religion in the Baltic states. She collected materials while monitoring religious rights issues in the area during the 1970s and 1980s. Although a member of the Church of England, she also felt at home in Lutheran and Orthodox churches, including the Russian Orthodox Church in the United Kingdom that belonged to the Diocese of Sourozh during the time Metropolitan Anthony was its leader. Sapiets and her associate Michelle Mapp collected materials pertaining to Metropolitan Anthony and the Diocese.

Sapiets’ articles on Catholics, Lutherans, and Seventh Day Adventists in the Soviet Union appeared in Religion in Communist Lands, Keston News Service, Frontier, British and American journals, and World Christianity: Eastern Europe (1988). She also translated materials from Russian into English, including The Unknown Homeland, samizdat detailing the life of an Orthodox priest in the Soviet Union, as well as sections of The Chronicle of Current Events, The Case of Leonid Plyushch, and From Under the Rubble. Keston published her 1990 book True Witness: The Story of Seventh Day Adventists in the Soviet Union.

Sapiets was unable to make the move to Oxford with Keston College because of health considerations and became a freelance writer, translator, and commentator on Soviet affairs. She passed away on July 5, 2012.