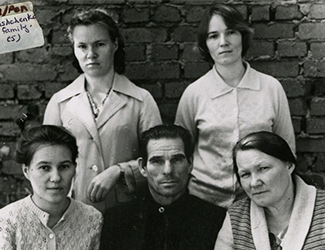 The Vashchenko family, including Lida on the bottom left with Peter and Augustina next to her, and sisters Lyuba (left) and Lila (right) on the top row.

Lida Vashchenko, also spelled Lidiya or Lydia, was the eldest daughter of the Vashchenko family that was part of Pentecostals who fled the Soviet Union to avoid religious persecution. The Vashchenkos (Peter and Augustina and daughters Lida, Lyuba, and Lila), along with Maria Chmykhalov and her son Timothy, became known as the Siberian Seven.

For years, the Vashchenkos attempted to leave the country. However, the Soviet Union refused to grant them exit visas. Peter and Augustina decided to homeschool their children to avoid the regimes’ harsh atheism rhetoric which led to them being declared unfit parents. Government officials abducted Lida and her sisters Lyuba and Nadya from their home and took them to an orphanage in an attempt to force atheism upon them.

In 1963, while Peter Vashchenko was in a labor camp because of his faith, Augustina rushed the United States Embassy with a group of Pentecostals and pled for emigration. In 1968, Peter attempted to enter the Embassy with his daughters Lida, Lyuba, Nayda, and Vera. That attempt also failed.

In 1978, the Vashchenkos received an invitation to Selma, Alabama. However, the Soviet Union denied their exit visas. Peter, Augustina, Lida, Lyuba, and Lila, with their brother John, decided to rush the embassy again and plead for emigration. Maria Chmykhalov joined them with her son Timothy even though they did not have invitations to America. John was captured in the attempt, but the other seven made it into the Embassy. The Siberian Seven spent five years, from 1978 to 1983, living in the basement.

In 1983, Augustina began a hunger fast which Lida soon joined. Word of the fast quickly became international news and spurred outrage. This began to force the Soviet Union to deal with the Seven.

Lida became so sick that she had to be hospitalized. After she regained her health, applied for an exit visa. It was granted, and Lida was the first of the Siberian Seven to leave the Soviet Union. She flew to Vienna and then to Tel Aviv. The other Siberian Seven, along with their families, were granted exit visas in the ensuing months. The Vashchenkos and Chmykhalovs settled in various places in the United States and Israel.