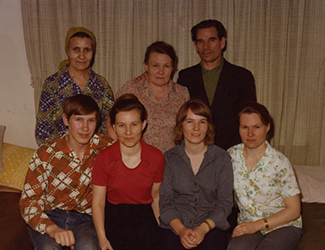 The Vashchenko Pentecostal Women, part of the Siberian Seven, were Christian believers who fled Moscow to avoid the Soviet Union’s increasing hostility and persecution toward religion, particularly Pentecostals. The Siberian Seven consisted of two families, Maria Chmykhalov and her son Timothy, and the Vashchenkos comprised of Peter and Augustine and three of their daughters, Lida, Lyuba, and Lila.

For several years, the Vashchenkos attempted to leave to country because of heavy persecution but were refused exit visas. For these emigration attempts, some of the children were abducted and taken to an orphanage to force atheism upon them. Both Peter and Augustina were imprisoned with Peter sent to labor camps multiple times. The entire family experienced job discrimination.

In 1963, while Peter was in a labor camp, Augustina rushed the American Embassy with a larger group of Pentecostals to plead for emigration. In 1968, Peter tried to enter the Embassy with Lida, Lyuba, and two of their sisters, Nayda and Vera. The attempt also failed.

In 1978, the Vashchenkos received an invitation to Selma, Alabama. However, the Soviet Union denied their exit visas. Peter, Augustina, Lida, Lyuba, and Lila, with their son John, decided to rush the embassy again and plead for emigration. Maria Chmykhalov joined them with her son Timothy even though they did not have invitations to America. On June 27, 1978, the eight of them rushed the Embassy. John Vashchenko was captured. The others successfully made it into the Embassy, but the Soviet Union still refused to let them emigrate. The Siberian Seven spent five years, from 1978 to 1983, living in the basement of the United States Embassy.

Several western groups began fighting for their right to emigrate. In 1983, Augustina began a hunger strike which Lida joined. Word of the fast quickly became international news and spurred outrage. The situation began to force the Soviet Union’s hand. After Lida was hospitalized, authorities granted her an exit visa. She flew to Vienna and then to Tel Aviv. The others, along with their families, were granted exit visas in the following months. Most of the Vashchenkos eventually settled in Washington state.