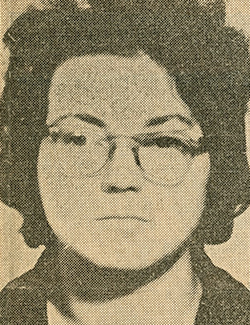 Born in Russia on May 26, 1936, Natalya Evgenevna Gorbanevskaya (also spelled Natalia Gorbanevskaia) worked as a poet, translator, and editor of such émigré publications as Kontinent and Russkaia mysl’. A leader of the Soviet human rights movement of the 1960s and 1970s, she received multiple awards and praise for her contributions to Polish culture and its dispersion, as well as to the advancement of mutual understanding between Poles and Russians.

Gorbanevskaya helped lead the group that staged an early protest inside the Soviet Union, the 1968 Red Square Demonstration that objected to the action crushing Prague Spring in Czechoslovakia. That same year, Gorbanevskaya began Khronika tekushchikh sobytii (The Chronicle of Current Events), Samizdat focusing on news about human rights and other dissident activities. She believed it her most important work, and some consider it the most important phenomenon of Soviet Union Samizdat.

In 1969, primarily due to her writing in the Chronicle of Current Events, authorities arrested Gorbanevskaya and assigned her to the Serbsky Institute, a psychiatric hospital which created false mental illness diagnoses to assist the KGB and other authorities in ensuring sane dissidents were confined to mental institutions. She spent more than two years in psychiatric hospitals.

After her release, Gorbanevskaya continued dissident activities. However, with the threat of being rearrested, she emigrated to Paris to work with Vladmir Maksimov on Kontinent, which became the leading Russian language émigré journal. She also wrote for Radio Liberty, most prominently on “East European Witnesses” which provided information about their areas to Russian speakers in Eastern Europe. In the 1980s, she wrote largely about Polish affairs for Russkaia mysl’. She also served on the editorial board for the journal, Novaia Pol’sha, published in Russian in Warsaw beginning in 1999 with the goal of establishing thoughtful dialogue between Poles and Russians.

Gorbanevskaya composed and translated poetry from Russian into Polish. One of her greatest achievements was the translation of Czeslaw Milosz’s Traktat poetycki (Treatise on Poetry).

Gorbanevskaya died at her home in Paris on November 29, 2013, and was survived by two sons.