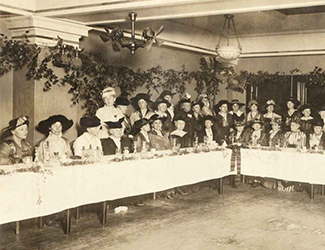 The Woman's Club of Waco, an educational and philanthropic club for the women of Waco, was founded on January 5, 1892. While the club began with only eight members, it grew rapidly, and soon included many of the leading women of the city. The club flower was the rose, and the club colors were red and white. In 1898, the Woman's Club of Waco participated in a meeting that formed a city federation of women's clubs. While the Woman's Club of Waco joined with other city clubs to accomplish common goals, the club has always retained a high degree of autonomy in their activities. Prominent among the club has been the ideas of self-improvement through education, as shown through their memorable motto: "If I rest, I rust." For much of its history, club members gave presentations on varied topics during monthly meetings. During World War I and II, many of the presentations had to do with the war.

During other time periods, presentations included topics of international interest, self-improvement, science, history, finances, among others. Voting rights for women was a topic of intense early interest, with the club signing a petition, along with other clubs, to be forwarded to Washington D.C. in support of voting rights for women. The club has been involved with efforts to improve the lives of Waco citizens since its founding. During the World Wars, club members visited soldiers at Camp MacArthur weekly, bringing books and food. They led a book drive to furnish the on-base library with books for soldiers, worked closely with the Red Cross to make bandages, and organized a benefit concert for soldiers in Carroll Library Chapel on the campus of Baylor University. Today, the Woman's Club of Waco continues to provide philanthropic and educational opportunities to the women of Waco.