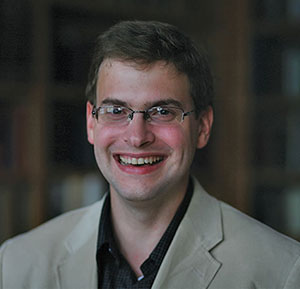 Through the generosity of the Brown Foundation, the Armstrong Browning Library is pleased to house an academic chair at Baylor University for a scholar-in-residence in Browning studies or Victorian literature and culture.

The most recent holder of the Margarett Root Brown Chair in Robert Browning and Victorian Studies was Dr. Joshua King, Associate Professor of English at Baylor University. As Chair, Dr. King served as a scholar-in-residence for the Armstrong Browning Library, researched and published on materials related to the Library’s holdings and attended and designed scholarly and outreach events to promote the Library’s standing as a world center for Victorian studies. Dr. King earned his Ph.D. at Harvard University and completed his undergraduate work at the University of Virginia. He served as Chair from 2014-2021.

Dr. King specializes in Romantic and Victorian literature, focusing on British poetic form, religion, and print culture—the social interaction and meaning-making enabled by the production, circulation, and reception of printed media. Within these primary research areas, he has actively published in three subfields: (1) nineteenth-century British print culture and religion; (2) Romantic poetic form and theory, focusing on connections between meter, ethics, and social norms; and (3) Victorian poetic form and theory, emphasizing theological views of poetic form. More recently, Dr. King has begun to combine an ecological focus with these interests in poetic form, religion, and print culture, and this has informed new scholarly projects and pedagogical initiatives.

He has drawn on the holdings of the Armstrong Browning Library throughout much of his scholarship, including Imagined Spiritual Communities in Britain’s Age of Print, published (2015) in Ohio State University Press’ series on Literature, Religion, and Postsecular Studies. The book demonstrates that nineteenth-century creative authors, journalists, educators, and clergy treated the circulating printed page as a medium for imagining and participating in conflicting versions of a virtual Christian community spanning the British nation.

More recently, Dr. King has co-edited, with Dr. Jade Werner, an interdisciplinary collection on nineteenth-century religion and culture.  Entitled Constructing Nineteenth-Century Religion: Literary, Historical, and Religious Studies in Dialogue, this collection brings together an international team of scholars from literature, history, and religious studies to interrogate not only the ways in which religion was constructed as a category and region of experience in nineteenth-century literature and material culture, but also how scholarship invokes and uses religion as a category now.  This collection will appear in Ohio State's series on Literature, Religion, and Postsecular Studies.

Dr. King has also incorporated research at the ABL into articles in a range of venues, including the Coleridge Bulletin, Victorian Literature and Culture, The Routledge Companion to Literature and Religion, The Oxford Handbook of John Henry Newman, and the international, interdisciplinary, open-access journal Religions. Additional scholarship by Dr. King has appeared, among other venues, in The Hopkins Quarterly, Christianity and Literature, Nineteenth-Century Prose, The CEA Critic, The Wordsworth Circle, Victorian Poetry, European Romantic Review, Essays in Romanticism, Romanticism on the Net, Victorian Studies, Reading the Abrahamic Faiths: Rethinking Religion and Literature (edited collection), and The Blackwell Encyclopedia of Victorian Literature.

Other Activities as Chair

As a teacher in Baylor's English department, Dr. King has been holding classes at the ABL for many years.  Students in these classes, undergraduate and graduate, actively use the ABL's archives to generate new knowledge and share it with the wider public.  For example, they have made interactive presentations on rare items, written online posts about understudied or newly discovered rare materials, and staged exhibitions of our holdings for the general public.

Since 2010, Dr. King has coordinated Baylor’s 19th Century Research Seminar (19CRS), an interdisciplinary forum for faculty and students from within and outside Baylor University to present and hear original research in all areas of nineteenth-century studies. The 19CRS has been instrumental in building bridges between the ABL, the English department, and other departments throughout the university.

Dr. King also actively seeks to bring top scholars to Baylor and to encourage international, interdisciplinary collaboration. In 2016, he organized an international conference, “The Uses of ‘Religion’ in Nineteenth-Century Studies.” Staff at the ABL and other campus libraries, the 19CRS, and many Baylor faculty and students offered their time and expertise to make this conference a great success. The conference brought together historians, literary scholars, scholars of religion, and theologians working in nineteenth-century studies, representing seven nations and coming from some of the world’s top universities. Dr. King will continue to lead such conferences, such as the 2019 conference on “Form, Ecology, and Religion in Nineteenth-Century Studies,” which is being planned in cooperation with a number of other universities. Additionally, he worked with Jennifer Borderud, the director of the ABL, and Pattie Orr, the former Vice President of Information Technology and Dean of University Libraries, to create a three-month research program at the ABL. Launched in 2017, the program brings top senior scholars of nineteenth-century literature and culture to Baylor.

In addition to attracting scholars to Baylor, Dr. King also encourages international study and archival research—at the ABL and abroad—among graduate students. In 2017, he launched an International Nineteenth-Century Studies Summer Program, which offers a five-week study-abroad seminar each summer for graduate students from a range of disciplines.  Students spend just over two weeks at the ABL in classes and archival research, and a corresponding amount of time in the United Kingdom engaging in further archival research and workshops, site-specific learning and literary tours, and interactions with UK faculty.  The inaugural 2017 seminar was titled "Wordsworth, Poetry, and the Environment." As this title indicates, each course helps students connect nineteenth-century studies to issues of present global concern, particularly the environment. In recognition of the fact that graduate-level education in the humanities can powerfully prepare students for a range of careers within and beyond the academy, the program includes project tracks designed to cultivate diverse skill sets, from scholarly research and engagement, to innovative pedagogy and place-based instruction, to museum curation and community outreach.