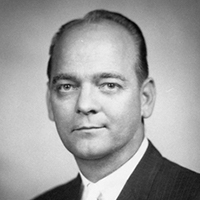 Byron M. Tunnell was born on October 14, 1925, in Tyler, Texas. He was educated in the Tyler public school system and attended Tyler Junior College. Following military service in the Naval Air Corps during World War II, Tunnell attended Baylor University where he earned a law degree in 1952. Tunnell then returned to his hometown of Tyler and served as an assistant district attorney before entering private practice. In 1959, Bob Bullock, future Texas Comptroller and Lieutenant Governor, joined the practice. Tunnell and Bullock developed a close friendship over the next forty years, sharing a passion for public service to their native Texas. When Bullock passed away in 1999, Tunnell delivered one of two eulogies at the funeral.

Tunnell was active with the Junior Chamber of Commerce (Jaycee’s) and by the 1950's turned his attention toward politics. He was elected to serve in the Texas House of Representatives from 1956 to 1965 and was appointed Speaker of the House from 1963 to 1965 by his peers. A second term as Speaker was projected, but to the surprise of many, Tunnell joined the Texas Railroad Commission in 1965. His tenure with the Railroad Commission coincided with the energy crisis of the early 1970's which led to his collaboration with the Interstate Oil Compact Commission.

On September 15, 1973, Tunnell resigned from the Railroad Commission to become a vice-president and lobbyist for Tenneco Inc., an oil and gas company based in Houston. In the 1990's, Tunnell returned to public service, first as a member of the Board of Trustees for the Employee Retirement System of Texas, and then as a member of the State Conservatorship Board. He was appointed by George W. Bush as a co-conservator to overhaul the struggling Texas Commission on Alcohol and Drug Abuse.

Tunnell died of cancer at his home in Lake Palestine, Texas, on March 7, 2000.

The timeline of the Byron Tunnell papers begins in the early 1950's and concludes in 1999, shortly before his death. Materials in the collection depict his years of public service, primarily as a member and Speaker in the Texas House of Representatives and later as Texas Railroad Commissioner. Additional materials related to his time as Vice President of Tenneco, Inc., are also housed in this collection, as well as items from his appointments to the Employee Retirement System and State Conservatorship Board.

Series 1. Appointments covers the positions to which Tunnell was assigned duties later in life. As a member of the Employee Retirement System and State Conservatorship Board, he created reports, commissions, funding manuals, newsletters, clippings, and other materials. Series 2. Campaign materials, which are arranged chronologically, include Tunnell’s races for the Texas House of Representatives (1956-1964) and for the Railroad Commission (1966-1972).

Series 3. Correspondence includes topical and personal letters, including some from Tunnell’s friend and former law partner, Lieutenant Governor Bob Bullock. Series 4. Court Cases highlights Tunnell’s appearance in the U.S. Supreme Court for the 1958 case Hawkins v. United States as well as other cases from the 1990's.

Materials in Series 5. Elected Positions are divided according to Tunnell's service on the Railroad Commission and in the Texas House of Representatives. Tunnell was Railroad Commissioner from 1965 to 1973 during an energy crisis, therefore, the materials are primarily focused on topics such as oil and gas. The Texas House of Representatives Subseries is divided according to each legislature and includes administrative files, correspondence, commemorative legislation, publications, and topical materials.

Series 9. Photographs ranges in date from 1935 to 1999, and documents personal and business moments throughout Tunnell's life. Campaign headshots, golf outings, Christmas photos, and several hunting and fishing trips are represented. The Press Series includes news clippings and newsletters from Tunnell’s career. Series 11. Speeches includes nearly 200 speeches given by Tunnell, including a eulogy for Lieutenant Governor Bob Bullock. These items, dated 1961-1999, kept in Tunnell's original order, highlight the number of organizations and individuals he was involved with during his life.

The collection consists of 28 document Boxes and 3 oversized boxes.