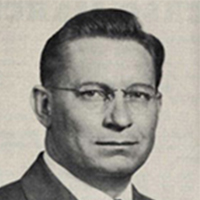 Caso March was born March 9, 1911, in Saginaw, Texas. He was a graduate of North Side High School in Fort Worth, Texas, and completed bachelors, masters, and law degrees at Baylor University in Waco, Texas. After graduating from Baylor, March was employed by the Federal Power Commission in Washington, DC from 1934-1942. While in Washington, March earned an additional master’s of law and doctorate in judicial science at the American University and National University, respectively.

In 1942, March enlisted in the Army during World War II. He served as an infantry officer, primarily in Southeast Asia. After his service, March and his family moved to Waco. During this time March began work as a faculty member in the Baylor School of Law and completed his first campaign for governor of Texas.

Caso March was a perpetual candidate for Texas Governor. He ran unsuccessfully in 1946, 1948, and 1950, once using the slogan “For every man, a tax-free home.” Prior to the 1950 election, he resigned his post at Baylor to pursue the campaign full time. Without a win, March returned to a career as an attorney for the National Labor Relations Board.

Caso March was married to the former Hattie Mae Yelvington and had two children, Ben and Ann.

The personal files contain mostly business, family, and campaign correspondence. Family correspondence is well represented with his wife Hattie Mae, amid their courtship during World War II and beyond. Also included are news clippings, scrapbooks, and limited photographs.