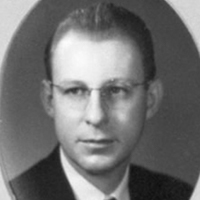 Ernest Ray Kirkpatrick was born in Trenton, Fannin County, Texas, on July 9, 1922. He was a graduate of Trenton High School in 1940, and served in the United States Army from 1942-1945. His tour of duty included stops in Italy, France, and North Africa.

After his return home, Ray Kirkpatrick, a Democrat, was elected to represent the 41st District in the Texas House of Representatives. He represented this district during the 50th, 51st, and 52nd Legislatures from 1947 to 1952. Kirkpatrick served on several committees, including Contingent Expenses, Federal Relations, and Military and Veterans Affairs. He was also a member of the Appropriations Committee and appointed Chairman, a record-setting accomplishment reached at the age of 26.

Ray Kirkpatrick graduated from the Baylor School of Law in 1958, and held a private practice until 1963 when he joined the State Board of Insurance. He was active with the Masons, American Legion, and Veterans of Foreign Wars. Kirkpatrick died on November 3, 1998.

The Ray Kirkpatrick papers include certificates, diplomas, photographs, scrapbooks, news clippings, correspondence, and subject files. Many items are personal in nature, however some of the topical items and photographs highlight the work he did while serving in the Texas House of Representatives. Also included are items documenting his time as a student at Baylor University, his business with the State Board of Insurance, and participation with the Masons.