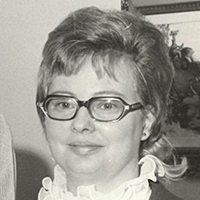 Lola Hopper was born near Houston and grew up there before moving to San Marcos prior to the start of high school. She was involved in high school student government, introducing a bill to desegregate extracurricular activities such as sports. The bill passed and sports were desegregated after she graduated. Hopper attributes her love for politics to the success of this early effort.

Hopper studied English and history at Austin Community College for one year before leaving school in 1965 to work as a secretary for Terrell Blodgett, Administrative Assistant to Texas Governor John B. Connally. In 1969, she became the office manager for Donald Adams, working for Adams during his time as a State Representative and a State Senator. When Adams left office in 1978, Hopper took a job in the TXU lobbying office until 1987 when she became office manager for State Senator Judith Zaffirini for two years. In the 1990’s, Hopper worked for Texas Attorney General Jim Mattox in his Outreach for the Blind Project, then for Attorney General Dan Morales’ Child Support Division. Finally, she worked for Texas Mental Health and Mental Retardation in Austin.

After a lengthy career working for various politicians and political organizations, Hopper retired in 2002. However, she remained an active volunteer for various Democratic Party politicians and political causes. Most notably, she was an early volunteer for the Hillary Clinton 2008 Presidential Campaign, coordinating volunteers when Clinton visited Waco on the campaign trail and recruiting veterans to attend the event. She was so active in Clinton’s campaign that she was chosen as a delegate to attend the 2008 Democratic National Convention in Denver, Colorado, casting her vote for Clinton in the race eventually won by Barack Obama.

The papers and materials collected by Lola Hopper were donated to the Baylor Collections of Political Materials in the summer of 2012. The collection contains mostly campaign materials from various campaigns Lola Hopper supported over 50 years of political activity, including yard signs, T-shirts, bumper stickers, and a large collection of political buttons. Also included are a large number of photographs taken at various occasions.

Hopper worked as a secretary for Texas State Senator Donald G. Adams during the 1970's. The materials in this collection include letters from Adams and his wife Linda, some office materials, photographs of Adams and his staff, and newspaper clippings. The collection also includes several items related to the State of Texas honoring Donald Adams as Governor for a Day on October 15, 1977. This includes several photographs, some certificates and commendations, stationary and programs, clippings, coffee cups, and the gavel and block which “Governor” Adams used that day.

Hopper collected several artifacts from various renovations of the Texas Capitol Building, starting in the 1960's and continuing all the way to the 1980's. These artifacts include bricks, chunks of masonry, nails, and a light fixture. The stones and bricks have had one side covered in felt so that the artifacts can be displayed, and Hopper kept them out of a respect for their historical value.

The collection is comprised of 4 document boxes and 14 oversized boxes.