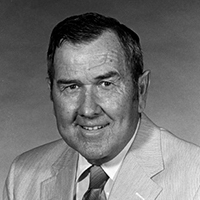 Charles W. Barrow was born September 22, 1921, in Poteet, Texas. He spent his youth in Atascosa, primarily in Jourdanton. Barrow graduated from the Baylor University School of Law in 1943 after which he joined the US Navy during World War II. He was active in the Pacific and European theaters, notably during the Normandy invasion, and earned seven battle stars. Barrow also served during the Korean War, retired as Captain, then continued to serve in the Navy Reserves until 1976.

In 1945, Barrow began practicing law in San Antonio, Texas, and by 1959, became a District Judge of the 45th Judicial District Court. Judge Barrow was appointed to the 4th Court of Civil Appeals in 1962, to fill the unexpired term left by the death of his father, Judge Hunter Barrow. In 1967, Charles Barrow was elected to the 4th Court of Civil Appeals and served in the position until 1977, the year he was appointed to the Texas Supreme Court.

Judge Barrow was twice elected to the Supreme Court, once in 1978, and again in 1982. While serving as Justice, Barrow received several accolades, including the Distinguished Jurist Gavel Award from the St. Mary’s University School of Law in 1978, the Greenhill Judicial Award from the Texas Municipal Courts Association in 1979, and the Distinguished Alumni award given by his alma mater, Baylor University, in 1982.

Justice Barrow resigned his position on the Texas Supreme Court to fill the post as Dean of the Baylor School of Law. He served in this capacity from 1984-1991. In 1991, he returned on a part-time basis as a Senior District Judge in San Antonio until his retirement in 1996. Barrow was widely regarded as a hard worker, evidenced by his 700+ written court opinions. Charles W. Barrow passed on June 25, 2006.

The Personal series includes General items such as family papers, military records, correspondence, event programs, and newspaper clippings. Also included are memorials and condolences kept by the Barrow family after the death of their son, Wally. The Campaigns subseries includes correspondence, general publications, and newspaper clippings. The clippings are of note due to their focus on Barrow’s opponents, Woodrow Wilson Bean and Don Yarbrough. The Certificates and Awards subseries contains diplomas, certificates, and other recognitions given to Barrow.

The Photographs and Scrapbooks series includes personal family photographs and photos taken while Barrow was a justice. Several scrapbooks are included and highlight his appointment as judge to the 45th District Court in San Antonio and several other judgeships. The Texas Supreme Court series contains Applications for Writ of Error presented while Barrow was a justice. Newsletters and Judicial Yearbooks are also present.