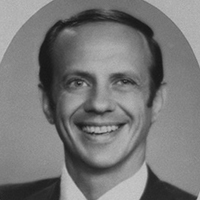 Donald G. Adams was born in 1938 in Jasper, Texas, to county judge T. Gilbert Adams and Dess Hart Adams. He attended Baylor University from 1957 to 1963, earning a Bachelor of Business Administration and a Bachelor of Laws. After his graduation, Adams took up legal practice in Lufkin for two years before returning to Jasper and forming a legal partnership with his father.

In 1972, Adams announced his candidacy for the Texas Senate, District 3. Adams endured a slightly contentious primary battle with J.C. Stallings, a radio station owner from Nacogdoches who attempted to play up Adams’s connections to the ousted Mutscher and the Sharpstown scandal. Regardless, Adams received his party’s nomination and ran unopposed in the general election. Adams served in the Texas Senate from 1973 to 1977, representing Anderson, Angelina, Cherokee, Hardin, Henderson, Jasper, Kaufman, Nacogdoches, Newton, Panola, Rusk, Sabine, San Augustine, Shelby, and Tyler Counties. During his senatorial career, he was a member of the Administration, Finance, Intergovernmental Relations, and Jurisprudence Committees in addition to numerous subcommittees and temporary topical committees. In 1974, Adams served as a delegate to the Texas State Constitution Convention. In 1977, Adams was elected by the Senate as President Pro Tempore ad Interim for the 65th Legislature.

In 1978, Adams resigned from his Senate seat to become Chief Legal Counsel for the Governor of Texas. He was appointed to the Texas Industrial Commission (TIC) in October of the same year, was elected TIC Chairman in 1979, and was appointed to a full six-year term on the Commission in 1983.

Adams is also a member of various community organizations including Kiwanis Club, the Texas Bar Association, and Chamber of Commerce. Don and his wife, Linda Cullum Adams, have three children: Don Jr., Debra, and Dinah.

Adams’s career coincided with a tumultuous series of events in Texas history. The Sharpstown Banking scandal became a salient issue in the 1972 election, leading to widespread disruption of the established legislative power structure and creating a more liberal legislature as many moderates became tarnished by their connections to this financial legislation/stock fraud scandal. Adams’s senate run skirted this issue fairly successfully despite his opponent J.C. Stallings’s consistent efforts to utilize the scandal against Adams in both print and radio advertisements. Stallings’s use of his personally-owned radio stations in the campaign became a part of the depiction of Stallings as an unscrupulous and litigious individual, which characterizes Adams’s approach to the issue. After defeating Stallings in the primary, Adams faced no opposition in the general election.

Adams’s Senate career also coincided with the Texas Constitutional Convention of 1974. Materials related to the Texas Constitution appear throughout Adams’s career. In addition to serving as an elected delegate at the convention, Adams proposed several amendments to the Constitution in the legislature and voted on other amendments introduced in legislative sessions. Along with constitutional amendments, Adams worked to amend the Texas Criminal Code and Family Code, especially as it related to parental rights of illegitimate children and foster families. In addition to these sweeping legislative issues, Adams was also a consistent advocate for both volunteer and professional firefighters, proposing legislation to improve their economic standing.

While in the legislature, Adams was a member of multiple committees and served as chairman of the Senate Administration Committee in the 64th and 65th sessions. Despite his varied and consistent committee membership, the only committees represented in this collection are the Administration, Jurisprudence, Intergovernmental Relations, and Counties Committees. Adams was a member of the House Counties Committee during the 62nd Legislature.

Adams diligently responded to constituent correspondence and appeared at community events when his schedule permitted it. This collection contains letters related to a broad range of legislative, community, and personal issues as well as a number of Adams’s responses.