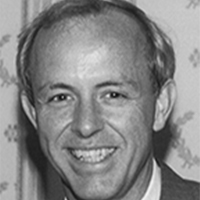 Fowler C. West was born July 6, 1940, in Bosqueville, Texas. He attended North Texas State University, 1958-1959, but received his BA degree in Political Science and History from Baylor University in 1963. He earned an MA from George Washington University in Legislative Affairs in 1980, and a JD degree from Georgetown University Law Center in 1988.

West began his government career in Washington, D.C. as a staff assistant in the office of Congressman W. R. Poage following his graduation from Baylor. From 1965 to 1969, he was on the professional staff of the House Committee on Agriculture where he had responsibilities involved with the Farm Bill of 1965 and the Laboratory Animal Welfare Act. Then, from 1969 to 1971, he served as Administrative Assistant to Poage acting as staff director and chief advisor.

In 1971, West returned to the House Committee on Agriculture as a staff consultant where he served as a legislative professional involved in the development and enactment of the Rural Development Act of 1972, the Farm Credit Act of 1971, and the Rural Telephone Bank Act of 1971. He was promoted to Staff Director of the Committee in 1973. As chief administrative officer of the Committee, he managed a staff of 50 professional and clerical employees and represented the Chairman in scheduling and processing of all legislative matters as well as organizing the Committee each session. During this period, the Committee developed several major legislative packages, including the Farm Bills of 1977 and 1981, and the Commodity Futures Trading Commission Act of 1974 which created the CFTC. He served under Committee Chairmen W. R. Poage, 1973-1974; Thomas S. Foley, 1975-1980; and Kika de la Garza, 1981-1982.

President Ronald Reagan appointed West a Commissioner of the CFTC in 1982 for a 5-year term. As a Commissioner, West participated directly in all significant decisions for the CFTC, including the designation of new markets, adoption of rules, commencement of enforcement actions, allocation of budget resources, ruling on appeals from Administrative Law Judges in customer reparation and enforcement cases, review of exchange disciplinary and emergency market actions, and maintaining industry oversight.

In 1992, when West’s second term expired, he continued to serve as a Commissioner until a replacement was named. From 1993-1995, he was Executive Director of the North American Securities Administrators Association, Inc. in Washington, D.C. From 1996 to the present, he has served as president of West & West in Alexandria, representing groups involved in preserving the Everglades ecosystem.

West married Anne Smith Paine of Valdosta, Georgia. They have three sons: Fowler West, Jr., Mitchell Paine West, and William Robert Poage West. He participated in the Baylor University Men and Women of Merit Week in 1984, and was the recipient of the Congressional Staffer of the Year award in 1977. From 2005-2016, he served as co-chair of the Standing Committee, a friend and fund-raising group for the W. R. Poage Legislative Library at Baylor University.

The Fowler C. West papers range from 1964-2009 and cover the career of Fowler West in Washington, D.C. The papers document his service on the House Agriculture Committee and his tenure as a commissioner with the Commodity Futures Trading Commission. They are arranged in three series, including Agriculture Committee, Commodity Futures Trading Commission (CFTC), and Personal, with CFTC being the largest series.

The Commodity Futures Trading Commission series includes eleven subseries. Following the General subseries, the Advisory Committee on CFTC-State Cooperation subseries contains materials documenting West’s chairmanship of the Federal Advisory Committee. Campaigns I and II subseries’ document West’s appointment to the CFTC in 1982. The Correspondence subseries is arranged chronologically. Dissents and Separate Views show the issues that were adjudicated to the level of the full Commission. The Meetings subseries has memos concerning business discussed at each commission meeting, notebooks for each quarter reporting on the staff, programs, statistics, and objectives of the CFTC, and memos from the CFTC’s Division of Enforcement, Division of Trading and Markets, and Division of Economic Analysis. News Clippings document national press coverage of West and the CFTC. The series also includes subseries' Publications, Memos, and Notes; and Speeches and Statements. The Subjects subseries contains all CFTC materials not filed with a particular committee meeting or with correspondence files. It is the largest subseries in the CFTC series.