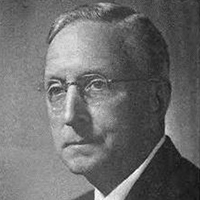 Clark Wallace Thompson III was born on August 6, 1896 in La Crosse, Wisconsin to Clark Wallace Thompson and Jessie Marilla (Hyde) Thompson. Five years later, his family moved to Oregon where Thompson spent the remainder of his childhood and adolescence. He attended the University of Oregon at Eugene where he was a member of Phi Delta Theta, an international social fraternity. In 1917, Thompson enlisted in the United States Marine Corps (USMC) and served for the duration of America's involvement in World War I. Following the war, he remained a member of the Marine Corps Reserves and in 1936 organized the Fifteenth Battalion of the USMC Reserves. His decades-long involvement in the military and his passion for national defense heavily influenced his political career.

In 1918, Clark Thompson married Libbie Moody, the daughter of William L. Moody, Jr. and Libbie Rice Shearn of Galveston, Texas. The Moody family had been long-established in Galveston society and business where the newlyweds soon settled. The Thompsons had two children, Clark and Libbie.

Thompson served as the treasurer of the American National Insurance Company and left to start his own mercantile firm which he owned until 1932. He was also secretary-treasurer of the Cedar Lawn Development Company until 1934. In 1933, Clark Thompson was elected to the House of Representatives from the 7th district of Texas to fill the vacancy left by the death of Representative Clay Stone Briggs. He served as a Democrat until 1935.

With the outbreak of World War II, Thompson was once again called upon to serve his country and was ultimately sent to the southwestern Pacific theater where he was the oldest officer in his unit. In 1943, he returned to the United States and became the Director of the Marine Corps Reserves. He held this position for three years until his retirement as a colonel in 1946. For his service, Thompson was awarded the Legion of Merit.

From 1947 to 1966, Thompson returned to politics and represented the 9th district of Texas after significant redistricting. Throughout his political career, Thompson served on several different committees including Agriculture, Maritime and Fisheries, and Ways and Means. While living in Washington, D.C., Clark and Libbie Thompson were important members of the social scene in the 1950's and 1960's. Their house was often referred to as the “Texas Embassy” or the “Texas Legation.”

Thompson was a lifelong member of the Episcopal Church as well as a member of the American Legion. He was also involved in the Veterans of Foreign Wars, the Texas State Society, and was a thirty-second-degree Mason and Shriner. Clark Thompson passed away on December 16, 1981, in Galveston, Texas, and was buried in Galveston Memorial Park Cemetery.

The Clark Thompson papers focus on Representative Thompson's years of service in the United States House of Representatives. The papers range from 1931 to 1966, but the bulk of the collection dates from 1959-1966, the last few years of Thompson's time in Washington.

Thompson served on several committees over the course of his legislative career. Series II. Committees reflects the committees on which he served, primarily the Agricultural, Maritime and Fisheries, and Ways and Means Committees.

Series III. Correspondence mostly contains the replies Thompson sent to various inquiries. In most cases, the original letter is not attached. The correspondence deals with various political and personal topics.

Series V., Legislative, contains bills and legislation from Thompson’s congressional terms. The materials are sorted according to the Congress (in two-year increments). One significant collection of folders pertains to the Panama Canal, an issue Thompson focused on specifically. The series has materials that span from the 1940's to the 1960's.

Series VI. Personal, as the name suggests, consists of various personal papers, including invitations sent to Thompson regarding events in both Washington, D.C. and the state of Texas. Clark and Libbie Thompson were popular figures in Washington's social scene in the 1950's and 1960's. The series also houses campaign materials from Thompson's first foray into politics as well as records from his last years in office.

Series VII. Public contains Thompson's communications with congressional districts, other branches of the government, and members of the media. This series illustrates how Thompson’s methods of communicating with his constituents evolved dramatically over time.

Series VIII. Scrapbooks contains eight scrapbooks spanning the years 1946-1964. These are filled with photographs, clippings, and other memorabilia from Thompson’s tenure in Congress.

Thompson's adopted state, Texas, is featured in the final series of his collection, Texas Affairs. This series includes a wide range of materials about his state and local area. As Galveston is a major coastal city, most of the documents in this series relate to the use and construction of local harbors, weather disasters, and public water access. Several folders pertaining to the Texas City Disaster contain correspondence, litigation, and legislation dealing with the aftermath of an industrial accident that occurred in 1947.

The collection consists of 96 document boxes and 8 oversize boxes.