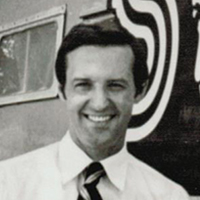 Alan Steelman (1942- ) represented Texas's Fifth District from 1973-1976 in the U.S. House of Representatives as a Republican. He ran a distinctive "walking campaign" against incumbent Democrat Earle Cabell and won. At the date of his election, Nov. 7, 1972, Steelman was the youngest Republican member of the House at age 29 and earned a post-graduate fellowship at Harvard's Institute for Politics in late 1972. Steelman's Congressional career immediately blossomed. He was named one of TIME Magazine's "200 Emerging Young National Leaders" in 1974. While in Congress, Steelman served on two committees - Government Operations and Interior and Insular Affairs. Environmental issues were one area in which Steelman left his mark, particularly the fight against the Trinity River Canal and for the formation of Big Thicket National Preserve. Other legislative priorities for Steelman included energy, transportation, veterans, wage and price controls, and Social Security.

His road to the House began with his upbringing in two towns in Arkansas: Arkadelphia and Fordyce. Steelman later attended Baylor University on a baseball scholarship and received his B.A. in Political Science in 1964. Next, he led the Republican Party of Dallas County from January 1966 to January 1969, and in 1971 graduated from Southern Methodist University with an M.L.A. During his leadership of the Dallas County Republicans, Steelman also remained executive director of the Sam Wyly Foundation of Dallas from January to September in 1969. President Richard Nixon appointed Steelman the executive director of the President's Advisory Council on Minority Business Enterprise in that same September in 1969. Steelman held that post until he stepped down to run for Congress January 1972.

Steelman ran for the U.S. Senate as a Republican in 1976 and lost to Democratic incumbent Lloyd Bentsen. In 1977, he began work with the Alexander Proudfoot Company, a worldwide consulting firm listed on the London Stock Exchange. He was appointed by Governor George W. Bush to the Texas Growth Fund Board, a $600 million venture capital fund run by the State of Texas. Other posts included Vice Chairman of the Board at the John Tower Center for Political Studies at SMU and the Trinity Foundation, Chairman of the Dallas Council on World Affairs, and former President of Maxager Technology, Inc. (now Profit Velocity Solutions), a private, California-based, software company.

While at Proudfoot, Steelman was Group President for the Asia-Pacific region. This enabled him to live in Singapore for eight years and build the Proudfoot start-up in that geographical area. Steelman oversaw the company's business interests in Malaysia, New Zealand, Australia, Indonesia, China, Korea, Taiwan, Japan, Hong Kong, and Thailand. He currently lectures on U.S.-Asia relations, drawing from his business experience in that part of the world.

The Alan W. Steelman papers contain materials from 1960-2003, the bulk of which are from 1973-1976: Steelman's service as U.S. Representative of Texas's Fifth Congressional District. The Administrative series consists of GOP office and district information, requests, and schedules. The Biographical section has background information on Steelman after his House race victory in 1973 and personal, family news articles from 1960-1969, and a folder of information on his Proudfoot leadership role. Campaigns feature news clippings, press releases, and campaign literature from two years: Steelman's 1972 House Campaign and his 1976 Senate Campaign. A large portion of the news clippings on the Senate campaign have now been rehoused in archival safe folders.

The Departments and Agencies series enumerates Steelman's contact with numerous federal agencies from 1973-1976. By far, the bulk of this series illuminates how Steelman voiced a variety of constituent concerns to the U.S. Postal Service. Also of note are recommendations written by Steelman on behalf of constituents to different federal departments such as the Department of Labor, Department of Justice, and the White House. The District series for Dallas highlights Dallas area concerns and contains photographs in the file on the Urban Park Baptist Singers. A Texas subseries of the District series mainly consists of materials on individual cities in Steelman's district, but also holds numerous folders on general affairs in Texas or local communities.

Next, Legislation by Committee encompasses bills from ten different Congressional committees. Legislation on banking and currency issues make up the largest subseries, followed by the Judiciary Committee subseries. The Judiciary Committee subseries chronicles sentiment in Steelman's district for and against bills on President Nixon's impeachment and the Watergate break in. Other notable subseries include: Government Operations, Interior & Insular Affairs (both of which Steelman served on) and the Cabinet Committee on Spanish Speaking People. Land use controversies dominates the subseries on Interior and Insular Affairs, just as revenue sharing does in the Government Operations subseries.

The Columns, Magazines, and Newsletters subseries of the Press are in poor condition. The Magazines subseries highlights Steelman's favorable reception by the mainstream Texas and American media upon his election and after his two terms in Congress. Steelman's Speeches and Floor Statements are in average condition and range from 1968 to his years after Congress. All of the post-Congressional speeches are undated and the majority of the speeches are from 1973. Additionally, most of the speeches were written on a typewriter with hand-written corrections. The Voting Record series retains alpha ordering by issue from the years 1973 to 1975. Steelman's voting by issue in 1976 is missing, but his roll call votes from 1973 to1976 exist in this series. The Photographs in the Audio-Visual series largely came out of three notebooks. A little over half of the photographs are undated and many have negatives. A list of the monthly radio programs Steelman gave in the Reel-to-Reel items.

The Clippings series contains photocopied clippings and is in good condition. This series spans the years 1966-2002 and has four subseries: General, House Campaign, News Clippings Scrapbooks, and Senate Campaign. The General subseries consists of articles from Steelman's time as chair of the Dallas County Republican Party and the Dallas Council on World Affairs to his directorship of the Wyly Foundation and employment at the Alexander Proudfoot Company. The News Clippings Scrapbooks encompass the years 1973 to 1976 and are oversized. Lastly, the Casework series ranges from 1975 to 1976.