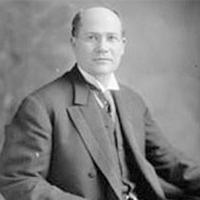 William R. Smith was born August 18, 1863, near Tyler, Texas. After an education in public schools, he graduated from Sam Houston Normal Institute in 1883 and was admitted to the bar in 1885.

Smith practiced law in Tyler until he moved to Colorado, TX in 1888, where he practiced law until he was appointed judge of the 32nd Judicial District in 1897. He served in this position until 1903, when the Democratic Party nominated him to represent the 16th District in the 58th Congress. He won the election convincingly and served in Congress from 1903-1916. In Congress, Smith served on several committees, including the Committee on Elections #3 and the Interstate and Foreign Commerce Committee (1910-1912). He became chairman of the Committee on Irrigation of Arid Lands in 1911, and held that position until 1917. He lost his reelection bid to Thomas Blanton in the 1916 primary but was appointed US district judge for the Western District of Texas by Woodrow Wilson in 1917. As part of this appointment, Smith and his family moved to El Paso, where he served in his position until his death.

Smith married Frances Lipscomb Breedlove in 1890, and the couple had five children. He died in El Paso on August 16, 1924.

The William R. Smith papers range from 1890-1953, and cover a portion of Smith’s personal life as well as the lives of various members of the Smith family. Included are letters between Smith and his wife Frances over the course of their courtship and marriage, discussing primarily details of their personal lives with some references to Smith’s work. Included also are a number of letters either to or from extended family members, such as Frances’ parents. There are two letters from outside sources extending congratulations on Smith’s appointment to the district court in 1897. The General series contains an investment check made out for Frances Smith (likely a daughter of W.R. and Frances) and a newspaper clipping pertaining to the 1912 Democratic Convention and the nomination of Woodrow Wilson over James Beauchamp Clark.

The papers are arranged first by primary correspondents and then chronologically. There are two series: I. Correspondence, II. General.

Series I, Correspondence, has two subseries: I. Frances and W.R., II. General.