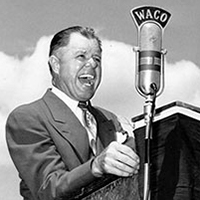 William Robert “Bob” Poage, the son of William Allen Poage and Helen Wheeler Conger, was born on December 28, 1899 in Waco, Texas. The Poage family moved to Throckmorton County shortly thereafter where William A. Poage worked as a rancher and cattleman. The Poages eventually returned to Waco in 1913. Five years later, in 1918, Poage graduated from Waco High School and joined the U.S. Navy as an apprentice seaman during the waning months of World War I.

Striving to increase his political influence, Poage tried to unseat U.S. Representative O. H. Cross of the 11th Congressional District of Texas. Poage lost in 1934 but succeeded in defeating Cross in 1936. It was to be the start of a long-tenured career for the Texas Democrat. On February 14, 1938, amidst his political successes, Poage married Frances Lenoir Cotton.

Poage served in the U.S. House from 1937 until his retirement in 1978, often running unopposed in the biennial elections. Drawing from his childhood experiences and education, Poage championed life in rural America, seeking improvements such as water and telephone services and helping to establish the Rural Electrification Administration. Often referred to as “Mr. Agriculture”, Poage was a key member of the House Agriculture Committee from 1941 to 1978, chairing the committee from 1967 to 1974. Upon his retirement from the House in 1978, Poage was succeeded by Democrat Marvin Leath.

The W. R. Poage Legislative Library was opened in September 1979 in honor of Representative Poage and serves as the repository for his personal and congressional papers. Poage wrote five books during his lifetime including three in retirement: After the Pioneers (1969), Politics-Texas Style (1974), How We Lived (1980), McLennan County Before 1980 (1981), and his autobiography, My First 85 Years (1985).

Poage passed away during open-heart surgery in Temple, Texas, on January 3, 1987, and is buried in Waco’s Oakwood Cemetery.

This entire collection consists of papers (1848-1994) and is currently being re-processed for entry into the Baylor Archival Repository Database (BARD).