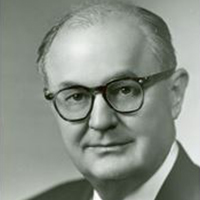 Wright Patman was born at Patman's Switch, Cass County, TX, on August 6, 1893. He graduated from Hughes Springs High School in 1912, and Cumberland University, Lebanon, TN, in 1916. He was assistant county attorney of Cass County from 1916-1917, when he joined the US Army as a private and machine-gun officer during World War I.

Patman served in the Texas State House of Representatives from 1924-1929, when he was elected as a Democrat to the 71st Congress. He served the 1st Congressional District from 1929 until his death on March 4, 1976.

The collection is comprised of a small amount of campaign items, correspondence sent to constituents by Patman’s administrative assistant after the death of the congressman. A list of bills introduced by Patman from 1929-1970, which was appears to be compiled at the same time, is included along with a relatively small number of Patman’s weekly letters which were published in local papers or mailed to constituents. The current arrangement is in four series: Campaign, Correspondence, Legislative, and Press.