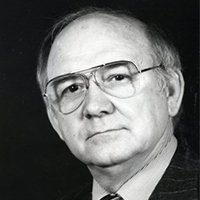 Edmund L. Nichols was born in Throckmorton, Texas, December 18, 1931. He attended Throckmorton High School, graduating in 1949, and then furthered his education in music at Hardin-Simmons University in Abilene, 1953. He is recognized as a Distinguished Alumnus at both schools. Nichols then attended the University of Texas at Austin, earning a master’s degree in music education, 1957. He married Sandra K. Heiligman in 1964, and they have three children: Dr. Jill E. Nichols, James E. Nichols, and Kelly R. Nichols Jones. They have six grandchildren and live in Austin.

During his undergraduate years at Hardin-Simmons, Nichols gained parallel experience in journalism, working full-time at the Abilene Reporter-News. After a brief period of teaching choral music in Pampa, Texas, he was employed by United Press news wire service, first in Dallas and then, in early 1955, to help cover the Texas legislative session and the inauguration of Governor Allan Shivers in Austin. As that session ended, Nichols was invited to join the staff of Texas Agriculture Commissioner John C. White as a technical writer.

After a brief hiatus from 1959 to 1961, when Nichols lived and worked in Hawaii, he rejoined the staff of Commissioner White, working from 1961 to 1965 as Administrative Assistant, then as Assistant Commissioner of Agriculture for Texas, 1965-1977. In 1977, White moved to Washington, D. C. and Nichols followed suit as the newly appointed Assistant Deputy Secretary of the U.S. Department of Agriculture. His D.C. career also included serving as the Foreign Agricultural Service (FAS) Information and Legislative Officer, 1978-1979. He also represented Agriculture on President Carter’s Export Policy Task Force and was named by President Carter to be a charter member of the U.S. Senior Executive Service.

The next chapter in Nichols’ agriculture career involved his appointment by the U.S. Secretary of Agriculture to several overseas posts. Nichols moved to Rome, Italy in 1979 as the U.S. Agricultural Counselor to Italy and was commissioned by President Reagan to the rank of Minister-Counselor in the U.S. Senior Foreign Service. The President of Italy decorated Nichols as Commendatore of the Italian Republic for his role in advancing U.S.-Italian trade relations. In 1982, Nichols transferred to Copenhagen to serve as U.S. Agricultural Counselor to Denmark and Norway, and again in 1985 to Madrid, Spain. From 1989-1992, he served as Agricultural Minister-Counselor to the U.S. Mission to the European Communities in Brussels, Belgium. His last assignment in Europe before retiring involved one more year as U.S. Agricultural Counselor in Madrid, 1992-1993. During the course of his service in Europe, Nichols served as chairman of the NATO Food and Agriculture Planning Committee, formed to plan security for Europe and America in the event of war.

The Edmund L. Nichols papers, 1913-2010, cover a significant span of Nichols’ public and personal life. This collection includes public and personal correspondence and photographs, speeches, mementos, and records from Nichols’ public service with the Texas Department of Agriculture, U.S. Department of Agriculture, Foreign Agricultural Service, and diplomatic service abroad in Italy, Denmark and Norway, Spain, and Belgium. There is also a significant portion of material related to his education and reunions with Throckmorton High School and Hardin-Simmons University, Abilene, Texas. The bulk of the material spans 1941-2009.

Series III, Diplomatic Service, is the largest series and includes materials from the 14 years Nichols spent in Europe with the Foreign Agricultural Service as an Agricultural Counselor in Rome, Copenhagen, and Madrid. In Brussels, he held a position as Agricultural Minister-Counselor with the U.S. Mission to the European Communities. Many invitations, photographs, records, public and personal correspondence, and travel mementos can be found in this series.

The Nichols papers also include personal material surrounding the life and family of Ed Nichols. These items are located in Series IV, Personal, and include correspondence, photographs, family history, music and drama books, high school and college materials, diplomas, reunion records and photos, and speeches and essays. Of particular note is his correspondence with Sarah Ragle Weddington.