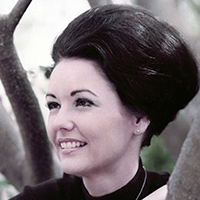 Mattie Mae McKee, the daughter of Sarah Taylor McKee and John Thomas McKee, was born in Sonora, Texas, on November 26, 1938. Her uncle, Basil Halbert Taylor, employed her throughout the summers of her high school years in the Law Office of Taylor & Murphy in San Antonio, instilling within McKee a love of the legal profession. After graduating from San Angelo High School in 1957, McKee earned her Associate’s degree in Business at San Angelo Junior College in 1959. She worked as a legal secretary for the firm of Kerr & Gayer where she earned her certification with the National Association of Legal Secretaries in 1966. At the time, McKee was one of twelve Certified Professional Legal Secretaries in Texas and the ninety-sixth to be certified in the nation.

Shortly thereafter, in March 1968, McKee entered the political arena as a congressional aide for Representative O.C. Fisher, a Democrat representing the 21st Congressional District of Texas. McKee worked for Representative Fisher until his decision to retire. In September 1974, McKee joined the staff of Representative W. R. Poage, a Democrat representing the 11th Congressional District of Texas. McKee remained as a member of Poage's staff until his decision to retire in December 1978. She then agreed to serve as the new Office Manager for Poage’s immediate successor, Democrat Marvin Leath. Under Leath, McKee faced the difficult task of establishing the office of a freshman Representative.

In July 1980, McKee left the House of Representatives behind and became the Executive Secretary for Senator John Tower of Texas, Chairman of the Senate Armed Services Committee. McKee held this position until January 1985 when Tower retired. McKee then accepted the Executive Assistant position for Senator John Warner of Virginia, remaining with his staff until April 1989 when McKee decided to leave Washington, D.C. and return to San Angelo.

After her lengthy career as a congressional aide, McKee earned a bachelor's degree in English and history at Angelo State University and worked briefly in the real estate field. She also pursued writing, co-authoring a two-volume history of her family, The Stories of the Taylors and Altizers:Passing It On, with her cousin in 2002. McKee later recounted her experiences in Washington, D.C. in her 2014 book, In the Shadow of the Greats: From Texas' Square Roots to Capitol Hill's Inner Circle.

The first five series follow the path of McKee’s career and are divided according to the appropriate Congressman. Similar types of materials are found throughout the collection, particularly correspondence, photographs, clippings, and programs. The donor also included research materials she gathered while compiling her book that was published in 2014, In the Shadow of the Greats. These documents have been placed in the relevant series, sometimes skewing the inclusive date ranges beyond the years McKee actually worked. The final series contains McKee’s personal materials relating to her book, research, and personal correspondence. Within each series, the folders are organized alphabetically by subject or material type. Series I. O.C. Fisher Years and Series IV. John Tower Years are the largest series in the collection.