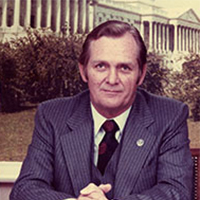 James Marvin Leath (1931-2000) was born in Henderson, Texas, on May 6, 1931. After attending Kilgore Junior College, Leath attended the University of Texas at Austin where he played lineman as a member of the 1953 winning Cotton Bowl team. He went on to receive his B.B.A. in 1954. Leath's road to Congress went through a stint in the U.S. Army (1954-1956), a football and track coaching position at his alma mater, Henderson High School (1957-1959), and business careers as a salesman, banker, and executive in the banking and manufacturing industries. From 1972-1974, he worked as a special assistant to W.R. Poage, U.S. Representative for Texas’s 11th District. When Poage retired in 1979, Leath ran for Poage's seat and won.

Leath served as the U.S. Representative for Texas’s 11th Congressional District from 1979-1990 as a Democrat. A conservative Southern or “Boll Weevil” Democrat, Leath remained ideologically aligned with his Republican colleagues on fiscal matters throughout his tenure in the House. He vigorously supported free market policies, spending cuts, and tirelessly worked for a balanced budget amendment to the Constitution. Moreover, Leath fervently pursued a policy of peace through strength and supported increased defense spending as well as nuclear armament. While in Congress, he served on the Armed Services Committee and the Public Works and Transportation Committee. Additionally, he chaired the House Subcommittee on Foreign Affairs and Defense of the Budget Committee.

Throughout his twelve-year Congressional career, Leath remained particularly devoted to the interests of the U.S. Army installation Fort Hood --one of the largest worldwide Army bases-- in his home district in Texas. He lobbied to keep the TCATA program at Fort Hood instead of moving it to Fort Ord in California. Leath also made an unsuccessful, but highly touted, bid for the chairmanship of the House Armed Services Committee. Other major legislative priorities included agriculture, banking and finance, veterans affairs, oil, and social security reform. He did not seek re-election to the 11th District seat in 1990.

After his retirement in 1991, Leath formed Marvin Leath Associates, a government consulting agency focused on the defense industry, based in Arlington, Virginia. In 1954, he married Alta Ruth Neill. Marvin and Alta have one son, Thomas, and separated in 1991. He remarried and later separated from a second wife, Penny. Leath also had a lifelong love of playing country music that started during his UT Austin days. He died December 8, 2000, at the age of 69 in Arlington Hospital. The visitors center at Fort Hood is named in his honor.

This collection holds materials from Leath’s congressional career in the U.S. House of Representatives, the bulk of which cover the years 1979-1991. The administrative series consists of office paperwork and contact information for personal administrative letters, non-governmental groups, scheduling, constituent requests, and office internship and financial records from 1975-1990. Leath’s fiscal conservatism makes the finances subseries an interesting and relevant one. In agencies, government departments who wrote Leath between 1978-1980 are represented. Moreover, correspondence covers Leath’s letters to and from constituents and other members of Congress on a wide variety of issues from 1979-1990.

The fourth series includes Leath’s contact with various departments, boards, and commissions in his district and Washington, D.C. Leath’s governing priorities and the composition of his district shine through the prominent materials in the departments subseries: communication with the Departments of Agriculture, Defense, and Treasury. One fascinating piece of the small Executive Branch series is personal correspondence between Leath and Ronald Reagan on Reagan’s economic plans. Other materials in that series are information on White House tours and press releases spanning the years 1979-1987. The Legislative series is the sixth and largest series of the collection. It has three subseries and covers legislative materials by topic, Leath-authored bills, and important bills Leath kept from the 96th-101st Congresses. In the Press series, his famed and blunt newsletters, constituent comments on the newsletters, and their drafts are held. Also, the Press series contains Leath’s press releases, mailings, speeches, and radio transcripts. The radio tapes connected to the transcripts are in the Audio-Visual series.

Two series, Trips and Voting Records, span the years 1979-1990 and 1979-1989 respectively. These series catalog the many district visits Leath made and his voting record on Congressional bills. The final series, Audio-Visual, houses photos of Leath with presidents, other Congressional leaders, and constituents during his trips. The second subseries in Audio-Visual comprises radio tapes of his newsletters. Finally, thirty-six oversize boxes containing awards round out the collection.