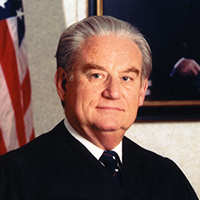 Sam Blakely Hall, Jr. was born in Marshall, Harrison County, Texas, on January 11, 1924. He graduated from Marshall High School in 1940 and obtained an Associate of Arts degree from the College of Marshall (now East Texas Baptist University) in 1942. He then began studying law at the University of Texas.

As most young men did during the time, Hall joined the military and served in the Army Air Corps from 1943-1945. After his service, he enrolled in the Baylor School of Law and graduated in 1948. Soon after he began to practice in his hometown of Marshall, Texas and did so until 1976.

In 1962 Sam Hall opposed Wright Patman in the Democratic primary to represent the 1st Congressional District but was defeated. Upon Patman’s death in 1976, Hall won a special election and began his tenure as a United States Congressional Representative. He attributed this, and five re-elections, to a strong standing in the local community.

During the 94th Legislature Hall served on the Education and Labor Committee as well as the Science and Technology Committee. From the 95th to the 99th Legislatures he served on the Judiciary and Veteran’s Affairs Committees and the Select Committee on Narcotics Abuse and Control. While on the Judiciary Committee he also served on subcommittees including Criminal Justice; Immigration, Refugees, and International Law; and Administrative Law and Governmental Relations which he chaired from 1982-1984.

As a Congressman Hall traveled with several CODELS, or Congressional Delegations to international locales including Lebanon, Germany, France, and Southeast Asia. His travel corresponded with the work he was doing while on the Judiciary and Veterans’ Affairs Committees and the Select Committee on Narcotics Abuse and Control.

Representative Hall was a conservative Texas Democrat. As such, he was one of the founding members of the “Boll Weevils”, southern Democrats who often sided with Republicans on national issues. Hall was also a supporter of President Ronald Reagan and his economic plans. This relationship with the Reagan led to Hall’s appointment as a federal judge.

In 1985 President Reagan nominated Sam Hall as United States District judge for the Eastern District of Texas. His continued interest in the law, and work on the House Judiciary Committee, kept Hall in contact with the skills needed as a judge. Hall was confirmed as District Judge May 3, 1985, which led to his resignation from the United States House of Representatives on May 27, 1985. He served in this capacity until his death, April 10, 1994.

Sam Hall was married to the former Madeleine Segal and had three daughters: Becky, Amanda, and Sandra. The United States Courthouse and Federal Building in Marshall, Texas is named in his honor.

The Committees series is divided into five subseries including committee and subcommittee work. The General subseries includes material collected regarding Hall’s general interests and not his specific committees; topics include appropriations, agriculture, banking and finance, foreign affairs, and ways and means. The other four subseries cover his work on the Judiciary and Veterans’ Affairs Committees and the Select Committees on Narcotics Abuse Control and Ethics.

As a native to the district he served, Congressman Hall was closely involved in the community. The Constituents, District, and Events series document his work and appearances. Alpha files and project files can be found as well as correspondence and invitations to various events. Restricted files are included in the District series.

The Judicial series includes items regarding the 1980 Reagan budget, however the bulk of materials is concentrated on Hall’s time as a federal judge. The Legislative series, in addition to the Committees series, make up the bulk of this collection. Legislative papers include bills, correspondence, Dear Colleague letters, program, and project files. Significant legislation in the files includes the Soft Drink Act, Hobbs Act, Simpson-Mazzoli Immigration Reform and Control Act, Immigration and Naturalization Act, and the Vietnamese refugee resettlement bills.

Newsletters, press releases, and radio transcripts can be found in the Press series. The radio transcripts correspond with the reel to reels and cassette tapes found in the Audio-Visual series. The Photographs, Albums, and Scrapbooks series includes visual materials collected throughout Hall’s congressional career. Most of the items are evidence of his work visiting the 1st Congressional district as well as hosting constituents and dignitaries in DC. Travel photos are also included.