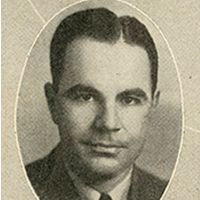 Ed Lee Gossett (1902-1990) represented Texas’s Thirteenth Congressional District from 1939 until his resignation in 1951. Although a Democrat himself, Gossett frequently opposed the policies of the New Deal wing of his own party. Gossett served as chairman for the Committee on Elections No. 2 and as member of the Immigration and Naturalization Committee. Later, as a member of the House Judiciary Committee, Gossett championed legislation restricting immigration quotas, securing state ownership of tidelands, and equalizing national railroad freight rates. He also worked with Senator Henry Cabot Lodge to introduce a constitutional amendment revising the Electoral College on a proportional system following the contentious election of Truman over Dewey in 1950.

Gossett, born January 27, 1902, moved with his parents from his birthplace, a sawmill camp called Yellow Pine located near Many, Sabine Parish in Louisiana, to a farm near Henrietta in Clay County, Texas in 1908. He attended public schools and then graduated in 1924 with a Bachelor of Arts, and subsequently in 1927 with a Bachelor of Laws from the University of Texas at Austin. After acceptance to the Texas Bar Association in 1927, he practiced law in Vernon, Texas, and served as district attorney of the Forty-sixth Judicial district from 1933 to 1937. In 1937, he moved to Wichita Falls and in 1938, was elected to the Seventy-sixth Congress on the Democratic ticket defeating pro-New Dealer W. D. McFarlane.

Throughout his career Gossett demonstrated interest in restricting immigration. His efforts culminated in his national and publicly strident opposition, beginning in 1946 and ending only with his resignation, to the Truman administration’s efforts to increase immigration quotas for displaced persons. Gossett not only sought to oppose this increase, but introduced bills reducing existing immigration quotas by half. Beginning in 1948 and until 1951, Gossett found himself also opposing the Truman administration in the Texas Tidelands Controversy. In addition to his public opposition, Gossett worked within his committee to secure the passage of several bills, including his own, recognizing state ownership of tidelands. This activity included maneuvering all tidelands bills to his subcommittee and doing “most of the leg work.” Because of his significant legislative role in the controversy, Gossett also corresponded with Price Daniel about Texas’s case in the Supreme Court on the same issue in order to coordinate efforts on both fronts.

In addition to these two prominent roles, Gossett worked on issues involving infrastructure, supply, and pricing in the oil industry, and on the equalization of national railroad freight rates to the Official Zone both during and following World War II. Furthermore, he took an interest in and publicly spoke on two significant events in the post-war world - Communism and the partition of Palestine. In July 1951, Gossett resigned his congressional office and resumed private practice as the general attorney for the Texas Southwestern Bell Telephone Co., and also served as Judge of Criminal District Court in Dallas, Texas. Gossett died on November 6, 1990.

The Ed Lee Gossett Papers span 1935-1953, and consist of seven linear feet of correspondence, speeches, congressional documents, reports, publications, and newspaper clippings. The bulk of the material documents the years 1945-1951, Gossett’s last three terms in office, and derives from Gossett’s legislative interests in the post-World War II Congresses in which he played several visible roles. These interests included the oil industry, interstate freight rates, Communism, and the UN and US policies toward the Palestinian partition, but most importantly immigration of displaced persons in post-war Europe and the Texas tidelands conflict. These last two subjects make up the bulk of the materials. Many of the materials on the other topics take the form of publications like magazines, weeklies, or newspaper articles and advertisements.

Aside from describing Gossett’s legislative activities, the collection also provides insight into some American attitudes toward all these issues through Gossett’s congressional correspondence and the numerous newspaper clippings, magazines, and other publications comprising the collection. Indeed, anti-Semitic sentiment pervades the topics of immigration, Communism, Palestine, and race relations, documenting this aspect of American thought during the post-war period. The collection contains little on personal matters. Materials on immigration chronicle Gossett’s legislative activities and nationally visible stance to reduce immigration quotas and oppose immigration of displaced persons while serving on congressional committees for immigration and naturalization from 1943-1951. They document his opposition to what became the 1948 Displaced Persons Act, as well as the fight to introduce tougher qualifications for immigration which eventually led to the passage of the Internal Security Act of 1950. The Tidelands series comprises information about the conflict between states and the national government over the control of submerged lands following the 1947 Supreme Court ruling in US v. California. It includes correspondence and publications documenting the battle from the states’, particularly Texas’s, perspective; statements before the Senate and House Judiciary Committees and their related bills; and filings with the Supreme Court.