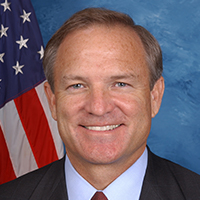 Chet Edwards was born in Corpus Christi, Nueces County, Texas, 1951 November 24. In 1974, he graduated Magna Cum Laude with a B.A. in Economics from Texas A&M University. He then worked for three years for Congressman Olin E. "Tiger" Teague, who was the most highly decorated World War II veteran in Congress and was known for 32 years as "Mr. Veteran" in Congress. At the age of 26, Edwards was encouraged by Congressman Teague to become his successor in 1978. Congressman Edwards narrowly lost in the Democratic primary to Phil Gramm, but then went on to earn an MBA from the Harvard Business School. In the 1980's, Congressman Edwards worked at the Trammell Crow Company in commercial real estate. Additionally, he owned and was the president of Edwards Communications, a rural radio station in South Texas.

From 1983 to 1989, Edwards served in the Texas Senate. As a Member of the Senate Education Committee, he played an active role in reducing class sizes in Texas' public schools and was named one of Ten Best Legislators by Texas Monthly magazine. Edwards was first elected to the United States Congress in 1990. He served as a member on the House Budget Committee, the Appropriations Committee, and the Financial Services Appropriations Subcommittee, and as vice chair of the Energy and Water Appropriations Subcommittee. He also co-chaired the House Army Caucus.

Congressman Edwards was known as a national champion for America's veterans, troops, and their families. After becoming Chairman of the Military Construction and Veterans Affairs Appropriations Subcommittee in 2007, Congressman Edwards authored a historic $17.7 billion increase in funding for veterans health care and benefits, the largest increase in veterans funding in the history of the Veterans Administration. Chairman Edwards also played a key role in enacting the 21st Century GI Bill of Rights into law, covering the full cost of a college education for our troops. In 2008, both the American Legion and Veterans of Foreign Wars recognized Congressman Edwards' leadership with their national awards given to only one member of Congress.

Good God: A Podcast with George Mason about Faith and Public Life (Season 6, Episode 9, July 1, 2021) featuring Chet Edwards, "How 'Love thy Neighbor' Led Him into Politics"

When he represented Fort Hood, the world's largest Army base, Congressman Edwards played a major leadership role in support of the U.S. Army, troops, and military families. In 2007, he received the Marix Congressional Achievement Award from the Military Officers Association of America (MOAA) in recognition of his work. In 2006, Congressman Edwards was honored with the Award of Merit, the highest award given by the Military Coalition, which represents 36 military and veteran groups. In 2003, the Association of the U.S. Army gave Congressman Edwards its "Legislator of the Year Award." He was co-chair of the House Army Caucus for over a decade and served on the House Armed Services and Veterans Affairs Committees for six years before joining the Appropriations Committee.

Early in his congressional career, Congressman Edwards became known as a leader in the fight against nuclear terrorism, and in 2001, strongly opposed cuts of $100 million to the nuclear non-proliferation budget proposed by the Bush Administration. Serving as a member on the Energy and Water Appropriations Subcommittee, Edwards helped to oversee key homeland defense and university research programs to protect Americans from the threat of nuclear terrorism. To ensure that more cargo coming into U.S. seaports was properly inspected, Edwards supported the implementation of the recommendations of the 9/11 Commission and, in 2003, helped secure $84 million to install radiological detectors at the busiest foreign ports so nuclear materials could be detected overseas before reaching America.

During his 20-year tenure in Congress, including 12 years of seniority on the powerful Appropriations Committee, Congressman Edwards developed a reputation of working hard and effectively for his Central Texas constituents. This reputation was the result of his commitment to protecting jobs and the local economy by making vital federal investments in key education, health, transportation, and water programs in his District. Securing important federal investments for Fort Hood, the Central Texas Veterans' Health Care System, and university research programs at Baylor and Texas A&M Universities was also a primary focus of Congressman Edwards' work in Washington.

Edwards is known as a fiscal conservative who believes massive federal deficits and the multi-trillion national debt are harmful to our economy and morally wrong to pass on to our children and grandchildren. The non-partisan Concord Coalition gave him its "Deficit Hawk" Award. His pro-economic, pro-agriculture record also earned him endorsements from both the U.S. Chamber of Commerce and the Farm Bureau Friends of Agriculture Fund (AGFUND). The U.S. Chamber of Commerce gave him their "Spirit of Enterprise" Award for several years for his support of business. As a strong supporter of Second Amendment rights, Congressman Edwards voted with the NRA 100% on gun rights issues for many years and received the NRA's endorsement.

As a respected voice on issues facing working families, Edwards pushed for increased access to health care for children of working families under the State Children's Health Insurance Program (S-CHIP), supported middle class tax cuts, and protected Medicare and Social Security benefits for America's seniors. As a lifelong person of faith, Chet was honored by the Baptist Joint Committee, and earned the Walter Cronkite Award from the Interfaith Alliance for his principled stand to keep government regulations out of churches and houses of worship. Congressman Edwards also received the T.B. Maston Christian Ethics Award.

In 2008, Congressman Edwards was vetted and became a finalist to become former Senator Barack Obama's vice presidential running mate. Since leaving Congress in 2011, Edwards was appointed the W. R. Poage Distinguished Chair of Public Service at Baylor University. He established Edwards, Davis Stover & Associates, LLC with his former chief of staff, Lindsey Davis Stover, and continues to be involved with veterans issues in the Washington, D.C. area through his work on the boards of the Military Child Education Coalition and the Arlington National Cemetery Advisory Commission.

The collection consists of records, primarily covering the years 1990-2010, and chiefly documenting Edwards’ career in the United States Congress. The Administrative files contain invitations and phone logs. The Campaign series consists of material recorded from 1990-2010. While relatively small, the majority of the materials include radio and television spot ads for Edwards related to his various political campaigns. Edwards represented Texas’ 11th congressional district until 2005 and the 17th congressional district from 2005 to 2010. The District files contain information about the various cities and constituencies located in those districts and are arranged alphabetically by geographic location. Topics include town halls, Fort Hood, Baylor University, and Texas A&M University.

Legislative files from the 102nd Congress (1991-1992) through the 111th Congress (2009-2010) reflect legislative priorities such as agriculture, appropriations, armed services, budget, homeland security, and veterans’ affairs. Within each Congress, files are arranged alphabetically by topic. Press files generated by Edwards’ office are organized by type: columns, mailers, news releases, newsletters, and radio calls. Materials are categorized as general for their broad scope and are organized chronologically. Newsletters contain documents addressed to constituents and are organized by topic. Speeches range in date from 1989-2009 and reflect Edwards’ service in the U. S. House of Representatives and part of his tenure in the Texas Senate. Arrangement is topical and chronological. Topics include campaigns, commencements, fundraisers, House floor speeches, and impeachment. Many of the speeches are written in Edwards’ own hand.

Topical series cover the gamut of activities and interests over his twenty years of service in the House. Of particular interest are records relating to the Branch Davidians, the Clinton Impeachment, and Religious Liberty. In 1993 February, the Bureau of Alcohol, Tobacco & Firearms, and the FBI laid siege to the Branch Davidian compound, located ten miles from Waco. After 51 days the siege ended tragically when a fire killed 76 people inside the compound, including the leader David Koresh. Materials include a copy of a response by Edwards to remarks made by Representative Ron Paul regarding the role of the federal government in the tragedy. The Clinton Impeachment proceedings in the House began during the second session of the 105th Congress and were completed in 1998 December. The Senate proceedings began in 1999 January. Of the impeachment proceedings, Congressman Edwards said, “Bill Clinton’s crime was poor judgment and immoral acts, not bribery, not treason, not high crimes and misdemeanors as the Founding Fathers demanded.” Materials include correspondence, Democratic Party press, proceedings, and research on the topics of impeachment, censure, and the Constitution. Edwards was a strong and effective voice on behalf of religious liberty, largely due to the influence of former Baylor University president Herbert H. Reynolds. Religious liberty documents are arranged alphabetically by topic. Each topic represents a major religious liberty/separation of church-state issue that transpired over his time in office. Included among the topics are: Charitable Choice (1995-2007), Religious Freedom Amendment (1994-2002), Religious Liberty Protection Act (1998-1999), and posting the Ten Commandments on public property (1997-2005). Edwards once stated, “The best way to ruin religion is to politicize it.”

The Correspondence series covers a number of topics and is the heart of Edwards' communication with constituents. The last series contains copies of Edwards' 2008 vice presidential vetting notebooks from when he was a finalist to be former Senator Barack Obama's running mate.

The collection Papers is comprised of 221 document boxes, 130 record boxes, and 67 oversize boxes