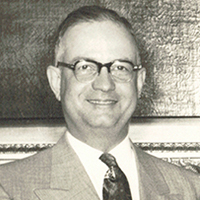 John Vernard Dowdy was born in Waco, McLennan County, Texas, on February 11, 1912. He spent his early years in Rusk, Texas, and graduated from high school in Henderson, Texas, in 1928. He attended the College of Marshall (now East Texas Baptist University) from 1929 to 1931.

Dowdy was elected as a Democrat to the 82nd Congress to fill a vacancy caused by the resignation of Tom Pickett. In the House, he served on the House Administration Committee and the Post Office and Civil Service Committee, serving as chairman of the Postal Operations Subcommittee in 1955 and 1956. He later served on the Judiciary and District of Columbia committees.

As a member of the Judiciary Committee, he authored legislation for protecting National Defense facilities; amended criminal laws to embrace air piracy; empowered postal authorities to police the mail; and proposed reforms in the control of obscene, pornographic, and subversive literature.

Dowdy was elected to ten Congresses serving from September 23, 1952, to January 3, 1973. However, his years of service were not without controversy. On March 31, 1970, he was indicted by a federal grand jury in Baltimore, Maryland, on charges of conspiracy, perjury, and promoting bribery. The indictment charged that Dowdy allegedly accepted a $25,000 bribe on September 22, 1965, to intervene in a federal investigation of Monarch Construction Company of Silver Springs, Maryland.

In documents donated by the Dowdy family following John's death in 1995, tapes, correspondence, and trial transcripts indicate that Dowdy may have been set up by those who opposed his conservative stance to urban renewal. These extensive documents are open to researchers.

The John Dowdy papers span the period of his life from the mid-1920s to 1986. While the bulk of the papers are from his congressional years, 1952-1972, there are also considerable materials in the Personal and Political series pertaining to his years as a court reporter and District Attorney (1935-1952). Another series, Trial and Imprisonment, dates mainly from 1970 to 1974, with a few letters written as early as 1965 and as late as 1978.

Dowdy’s Personal papers contain information about his family, court reporter and legal files, and media materials such as 3" reel-to-reel tapes, 12" vinyl records, 16 mm film, cassettes, and video tapes. Some of the material has been digitized and captured on DVD and/or made into mp3 files. It is rounded out with campaign material, including speeches given on the campaign trail and at numerous civic meetings and events. Publications in this series show Dowdy’s conservative roots.

The Trial and Imprisonment series contains legal documents related to the trial, including appeals, FBI and defense reports, personalities, proceedings, and a complete trial transcript. A large portion of the series is supportive correspondence from people in Dowdy’s district, Texas, and throughout the United States.