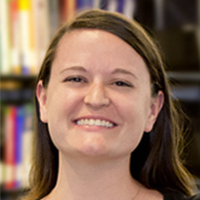 Tabitha Patterson is the Cataloging and Government Documents Librarian for the Law Library. She manages all of the incoming materials for the library collection and making sure that the digital catalog properly represents the library’s offerings. She also manages the library’s government documents collection and maintains their depository standing, alongside a multitude of other projects and tasks.

Tabitha has been a part of the Baylor family since she came to Baylor as a freshman undergraduate in 2005. She graduated with a BA in both Religion and English in 2009. After spending a year teaching and working for a church in England, she returned to Baylor to study at Truett Seminary. She graduated with her Masters of Divinity in May of 2014 and immediately began working in the law library as the serials specialist.

Tabitha and her husband, Jared, live in North Waco and love being involved in the growth the city is experiencing. Their family continues to grow as well, including their two young daughters, two dogs, and a varying number of backyard chickens. They are involved members of DaySpring Baptist Church. Tabitha spends much of her spare time baking or pursuing any number of creative endeavors.