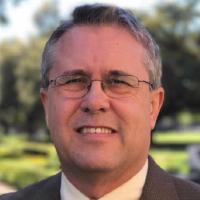 Throughout his career at Baylor, Richard has served in several managerial and leadership positions in support of teaching, learning and research technology. He began working in the Computation Center (now ITS) in 1983 as an analyst/programmer, and later served ITS for seven years as Asst. Director for Student Technology Services . In 2002, Richard moved to the Baylor Libraries to help create the Electronic Library (now LATS - Library & Academic Technology Services) to facilitate centralized academic technology services and resources for the university. In his current role as Asst. VP for Academic Technology, he provides leadership and direction to the LATS groups (Learning Spaces, Learning Systems, Learning Design, and Experiential Learning Commons) charged with provisioning and supporting technology used in the academy.