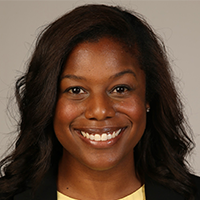 Adrienne Cain joined the Institute on August 1, 2016 as Assistant Director. As part of the position, Adrienne was also named Secretary/Treasurer of the Texas Oral History Association (TOHA) and holds the rank of Lecturer on the Baylor University faculty. Adrienne came to Baylor from the Houston Public Library, where she served as the Oral History and Media Librarian for the Houston Metropolitan Research Center (HMRC). In that capacity, she facilitated access to a collection of over 1,500 oral histories through organizing, arranging, describing, transcribing, digitizing, and developing policies and procedures. Prior to joining HMRC, she worked as the Oral History Librarian for the African-American Library at the Gregory School, where she reorganized their collection and significantly increased awareness of the collection along with the amount and quality of the recordings. Due to these efforts, TOHA recognized the Gregory School in 2014 with its Mary Faye Barnes Award for Excellence in Community Oral History.

Adrienne was introduced to the world of oral history while serving as an intern in NASA’s Johnson Space Center History Office.  She joined TOHA in 2013 and began immediately making contributions. In addition to receiving the TOHA community award in 2014, she attended the annual conference that year in Nacogdoches. In 2015, she presented a paper at the annual conference in Commerce and was elected a member of the Board of Directors. In 2016, she contributed to the annual conference in Waco by chairing a session and presenting the Hendrickson Award during the luncheon and served as a judge for the 2016 Texas History Day competition. Adrienne is also a member of the Oral History Association (OHA) and presented a paper at OHA’s annual meeting in 2015 in Tampa, Florida. She also holds membership in the Society of Southwest Archivists, the Texas Library Association, and Archivists of the Houston Area.